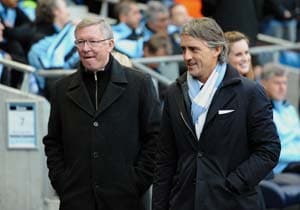 Mancini was keen to sign the Holland forward from Arsenal during the close-season, but the Italian was forced to admit defeat in his pursuit earlier this month as United snatched him from City's grasp.

As City prepare for the start of their Premier League title defence against Southampton at Eastlands on Monday, Mancini knows he still has a fine attacking quartet in Sergio Aguero, Mario Balotelli, Carlos Tevez and Edin Dzeko to call on.

Mancini maintains he would not have been able to sign another striker without one of his forwards departing and is satisfied with his attack for the new campaign.

"I told you three weeks ago that he would either stay at Arsenal or join another club, but not us," Mancini said at a press conference on Friday.

Asked whether he was frustrated to miss out on Van Persie, he said: "No, we have four strikers so it was impossible to put another striker in the squad, even though he is one of the best."

Despite winning the league for the first time since 1968, Mancini considers United the team to beat in the Premier League.

"I said this seriously. United have played for the title every season for 20 years," Mancini said. "Just because we won the championship last time we can't change that.

"For this reason they are favourites for the title. Now they have van Persie as well. He was the best striker last year, a fantastic player.

"With (Wayne) Rooney it will be one of the best partnerships in the Premier League. Van Persie is one of the best strikers in the world. Maybe they bought him because they needed another striker.

"Now they are better, for sure. Any team who have bought van Persie will be better."

Mancini has also played down suggestions of a rift with sporting director Brian Marwood.

Having expressed his frustration at City's lack of transfer activity, Mancini last week claimed questions about the club's signing policy should be directed to Marwood.

But he feels last week's purchase of Jack Rodwell from Everton is a step forward and is targeting further additions before the transfer window closes at the end of the month.

"It's good that we bought Jack. What I said wasn't because I have a problem with Brian. When you're a manager you want to buy players quickly," Mancini added.

"At the same time it's difficult market, I appreciate that. I don't have a problem with Brian.

"It was important to start with one (signing). Now we have to concentrate on the game then we have 10 days to the end of the window. I'm sure we will."

Mancini feels the addition of Rodwell gives him several options to work with.

The England international started his career as a centre-back but has recently been used in midfield by Everton manager David Moyes.

Mancini believes Rodwell, 21, will be a useful member of his squad.

"He is now and for the future because he's young. For me he's a really good player and he will have a good future for us and the national team," Mancini said.

"He can play in different positions, he's young, he can improve a lot.

"It's important to put a player like Jack in the squad. He's played for Everton for three years and he has experience of playing for the national team. I think he's a good player.

"His position is as a midfielder but he can play in the centre of defence. If you have a player like him he can play in different positions, it's good for him and for us."