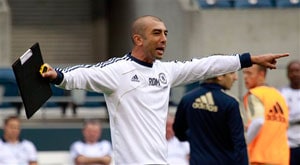 Attacking playmaker Eden Hazard left French club Lille for Stamford Bridge in a transfer worth 33 million ($40 million). The 21-year-old Belgian international was linked to both Manchester clubs but said the penalty shootout victory over Bayern Munich in the Champions League final persuaded him to join Chelsea.

"It's true that initially there were a number of clubs in for me but when Chelsea won the Champions League, I thought why not?" Hazard said. "By anybody's standards, winning two cups is a great achievement, so it will be a big challenge to do better."

German winger Marko Marin joined from Werder Bremen as did Brazil playmaker Oscar from Internacional for a reported 25 million pounds ($39 million). Oscar will wear the No. 11 shirt vacated by the man who scored the winning penalty against Bayern, Didier Drogba.

Drogba's contract expired after scoring a late equalizer in the final as Chelsea came from behind to win in Bayern's own stadium, Allianz Arena.

The exodus of strikers along with the arrival of three of Europe's finest creative midfielders suggests Fernando Torres will be at the point of Chelsea's attack, despite enduring a mostly fruitless 18 months at the club since joining from Liverpool in January 2011 for 50 million pounds.

Torres has only 12 goals in 43 appearances since arriving at Stamford Bridge, but he won the Golden Boot at the 2012 European Championship with three goals as Spain won its third consecutive international tournament.

Di Matteo knows it could take time to implement his system with so many new players.

"I think what's most important now is to integrate the new players into the side," Di Matteo said. "Obviously, bringing in players with different abilities and qualities might change the face of our team a little bit as well. But we have to always find the right balance between attacking and defending.

"I think moving between the lines and rotation can be an attacking threat for us. We had only Juan Mata playing that role last year, although Raul Meireles played there a few times as well."

As a result of the Champions League triumph, Chelsea will compete in the European Super Cup and Club World Championship in Japan for the first time during the season.

"We have a lot of targets and objectives to achieve this season, competitions that are very difficult to qualify for, like the European Super Cup and the World Club Championship," said Di Matteo. "It takes a long time to reach those competitions and it's hard to get there."

The Italian signed a two-year contract in June after initially being promoted from an assistant to interim manager in March following the dismissal of Andre Villas-Boas.

There is undoubtedly a buzz surrounding the European champions, but Di Matteo will be all too aware of the impatience of owner Roman Abramovich.

Di Matteo is Abramovich's eighth manager in nine years and, despite winning two trophies last season, the sixth-place finish in the Premier League would not have pleased the Russian oligarch.

Di Matteo will be expected to quickly integrate the new signings while helping Torres rediscover his previously clinical touch in front of goal. Should he do so, Chelsea should not only provide a strong Champions League defense but also contend for a fourth Premier League title.

Chelsea's season has already begun with a 3-2 defeat to Manchester City in the Community Shield.

Fernando Torres gave Chelsea a first half lead before a red card to defender Branislav Ivanovic moments before halftime encouraged City to mount a comeback, scoring three goals in 12 second half minutes.

"We competed very well up to that point. We were in the lead, I was happy to be going in at half-time with that lead," said Di Matteo. "We knew the second half was always going to be difficult with 10 men."

Comments
Topics mentioned in this article
Football Branislav Ivanovic Marko Marin Didier Drogba Liverpool Chelsea Manchester City Alex Ferguson Mark Hughes Oscar English Premier League
Get the latest updates on India vs South Africa and check out  Schedule, Results and Live Score. Like us on Facebook or follow us on Twitter for more sports updates. You can also download the NDTV Cricket app for Android or iOS.