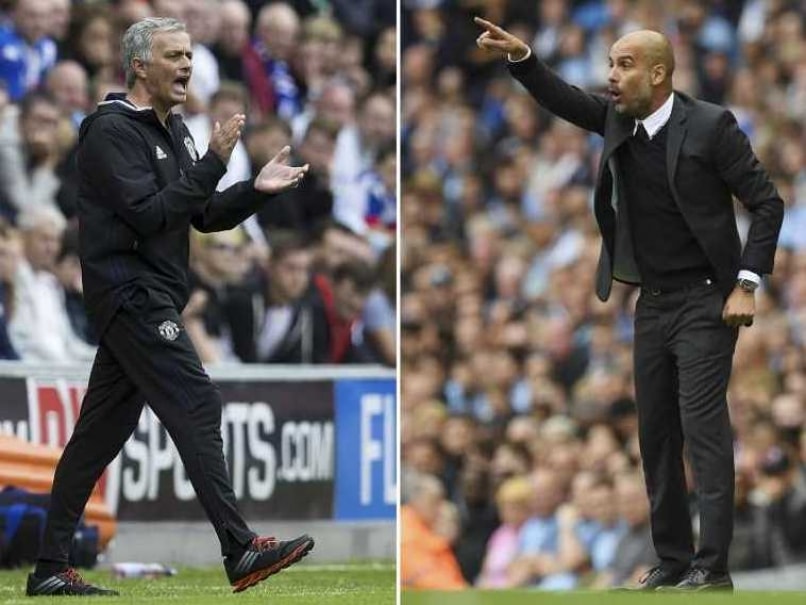 Friends who became foes, Mourinho and Guardiola represent opposite ends of football's ideological spectrum and their ongoing grudge match has shaped the game's recent history.

It is three years since they last shared a touchline and Saturday's clash at Old Trafford marks the resumption of a duel that could determine the outcome of the Premier League title race.

"He (Guardiola) left Barcelona for a number of reasons," former Liverpool defender Jamie Carragher wrote in the Daily Mail when Mourinho was appointed by United in May.

"But one of them, I'm sure, is the continual baiting to which he was subjected by Mourinho in the media.

"It is inevitable, at some point, that theme will return. Guardiola must be thinking: 'Oh no, not him again.'"

Though renowned for their different demeanours, the pragmatic Mourinho, 53, and the idealistic Guardiola, 45, have both shown a capacity for ruthlessness in their early days in Manchester.

Both men have also delivered impressive initial results, leaving their clubs neck-and-neck on nine points -- along with Chelsea -- after the first three games of the season.

It is two decades since their paths first crossed at Barcelona in the mid-1990s, when Guardiola was captain and Mourinho worked as an assistant to Bobby Robson and Louis van Gaal.

The pair became close, but they found themselves in opposition at Camp Nou in 2008 when Barcelona went in search of a successor to Frank Rijkaard as manager.

Despite Mourinho's stellar achievements with Porto and Chelsea, he was overlooked in favour of the inexperienced Guardiola.

In an iconic image, Mourinho raced across the Camp Nou pitch in celebration, his right hand provocatively raised in the air.

Mourinho's appointment by Real Madrid that year brought him into regular confrontation with Guardiola.

Mourinho's first Clasico ended in a humiliating 5-0 defeat and during a sequence of four encounters in two weeks later that season, the rivalry between the men turned ugly.

In the build-up to their Champions League semi-final, Mourinho's acerbic comments prompted an angry, foul-mouthed response from the usually placid Guardiola.

That year's Spanish Super Cup witnessed a new low in the relationship between the clubs as Mourinho poked Guardiola's assistant Tito Vilanova in the eye during a touchline shoving match.

They last met in 2013 when Guardiola's Bayern Munich edged Mourinho's Chelsea on penalties in the UEFA Super Cup.

Ahead of the current campaign, both managers were at pains to play down the significance of their rivalry.

"In the Premier League, if I focus on him and Manchester City, and he on me and Manchester United, someone else is going to win the league," Mourinho said.

Guardiola said managers like Mourinho pushed him to "reach another level".

But the gloves will come off when the referee's whistle sounds at Old Trafford on Saturday, if not in the pair's pre-match press conferences the day before.

The presence of the swaggering Zlatan Ibrahimovic in United's forward line only adds spice to the blend.

Ibrahimovic, who has scored four goals in four games for United since joining from Paris Saint-Germain, has played for both men and has very different opinions about each of them.

Ibrahimovic played under Mourinho for only one season at Inter, winning the 2008-09 Italian title, but described him as someone "I was basically willing to die for".

He branded Guardiola, who sidelined him at Barcelona the following season, a "spineless coward".

Manchester is about to find out whether the city is big enough for both of them.