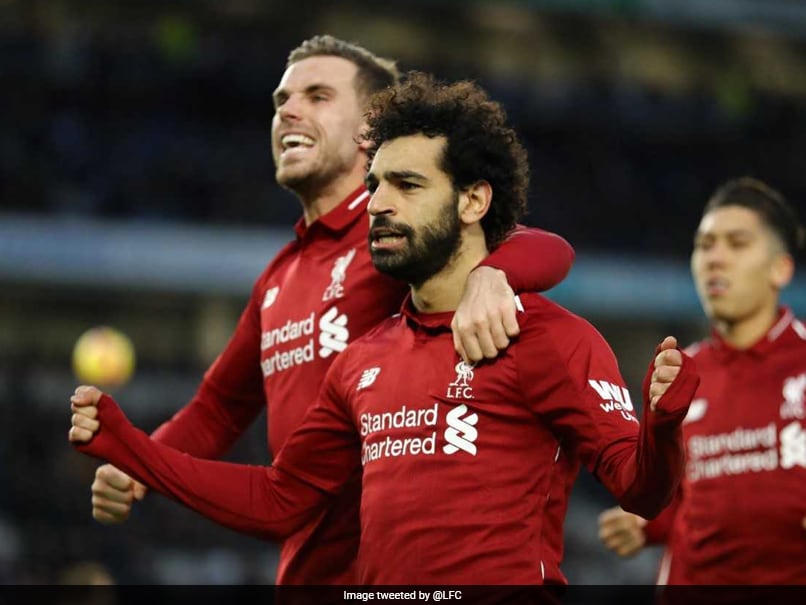 Salah converted a spot-kick after being brought down in the box by Pascal Gross.© Twitter/LFC

Mohamed Salah's second-half penaltywas enough to give Premier League leaders Liverpool a 1-0 win away to Brighton on Saturday that saw them go seven points clear at the top of the table. Jurgen Klopp's men were enduring a frustrating afternoon on the south coast until Egypt forward Salah converted a spot-kick after being brought down in the box by Pascal Gross at the Amex Stadium.  Second-placed reigning champions Manchester City, fresh from a 9-0 rout of Burton Albion in the first leg of a League Cup semi-final, will look to close the gap at home to Wolves -- who knocked Liverpool out of the FA Cup -- on Monday.

Saturday's early kick-off sawteenage midfielder Declan Rice score his first West Ham goal in a 1-0 win at home to London rivals Arsenal. Victory, in front of a London Stadium record crowd of over 59,000, cemented the Hammers' place in the top half of the table.
Rice's 48th-minute strike saw the midfielder give himself an early present ahead of his 20th birthday on Monday.

West Ham's Marko Arnautovic waved to home fans when substituted in the 71st minute which suggested the Austria forward, linked with a move to the Chinese Super League, may have played his last game for the club. "We will see what happens in the next days," Manuel Pellegrini, the Hammers manager, told Sky Sports when asked about the future of Arnautovic.
Defeat dented Arsenal's bid for Champions League football ahead of next week's clash at home to Chelsea.

The fourth-placed Blues will be six points clear of the Gunners if they beat strugglers Newcastle in Saturday's late kick-off at Stamford Bridge "This afternoon is a bad result for us," said Arsenal manager Unai Emery.

At the other end of the table, 10-man Southampton moved a point clear of the bottom three with a 2-1 win away to Leicester. James Ward-Prowse's penalty, awarded after Nampalys Mendy fouled Shane Long, gave the Saints an 11th-minute lead. But the visitors found themselves a man down when Yann Valery was shown a red card for a second bookable offence after tugging the shirt of Marc Albrighton.
Southampton still doubled their lead just before half-time when Long pounced on a mistake by goalkeeper Kasper Schmeichel.

The Foxes scored a second-half goal through Wilfried Ndidi but it wasn't enough and defeat saw Leicester, managed by former Saints boss Claude Puel, booed by their own fans come full-time at the King Power Stadium. Fulham remained in the relegation zone after a 2-1 loss to Burnley that saw them concede two own-goals in three minutes at Turf Moor as the Clarets -- who didn't have a shot on target -- moved three points clear of the drop.

Andre Schurrle put Fulham ahead in just the second minute but Burnley equalised in the 20th minute through Joe Bryan's own-goal and were soon in the lead when Denis Odoi also put through his own net. Craig Cathcart scored at both ends as Watford won 2-1 away to Crystal Palace in a match coinciding with the second anniversary of former Hornets manager Graham Taylor's death.
Watford defender Cathcart gave Palace, whose manager Roy Hodgson is also a former England boss, a 38th-minute lead with an own-goal.

But he equalised midway through the second half before Tom Cleverley's volley into the top corner won the game for Watford with 16 minutes left. Huddersfield remained bottom of the table following a goalless draw away to relegation-threatened Cardiff. Third-placed Tottenham Hotspur face Manchester United at Wembley on Sunday when Everton are at home to Bournemouth.