Everton are currently seventh in the Premier League with 24 points while Watford are 12th with 21 points. 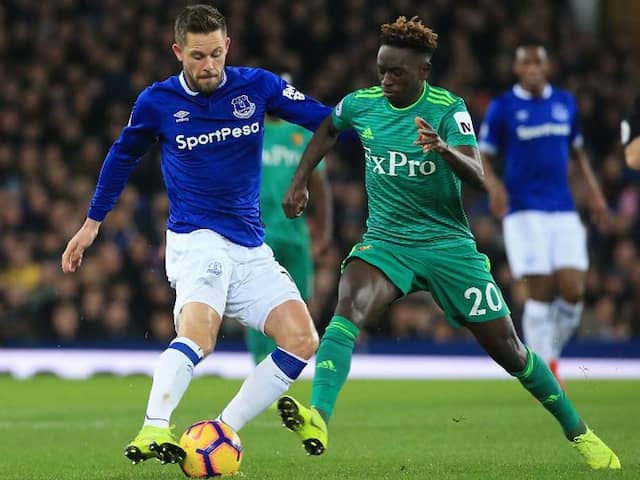 Everton scored in the final seconds of stoppage-time to hold Watford to a 2-2 draw.© AFP

Marco Silva had the last laugh against his former club Watford as Everton defender Lucas Digne's last-gasp free-kick rescued a dramatic 2-2 draw at Goodison Park on Monday. Everton manager Silva was facing Watford for the first time since his acrimonious departure from Vicarage Road in January. The 41-year-old was sacked by Watford after less than a year in charge, with the club's owners blaming Everton's interest in the Portuguese coach for distracting him from his job. Convinced he treated them disrespectfully by showing interest in Everton, the Watford fans who travelled to Goodison Park waved inflatable snakes and directed abusive chants at Silva.

With just seconds to go, it seemed Silva would be bitten by his old Premier League employers.

Everton's Richarlison, signed from Watford by Silva, put the hosts ahead in the first half.

Seamus Coleman's own goal drew Watford level after the break and Abdoulaye Doucoure's header put them in front before Everton midfielder Gylfi Sigurdsson had a penalty saved by Ben Foster.

But Digne came to Silva's rescue in the sixth minute of stoppage-time to deny Watford the revenge they so badly wanted.

Insisting he didn't care about silencing the Watford taunts, Silva said: "Of course not. I didn't see anything. It's not important to me.What I can control is my players.

"It's a difficult match to talk about. We lost our focus completely for their goals."

Eventually hired by Everton in May, Silva summed up the difficult nature of his Watford exit last week when he made it clear he was unsentimental about facing his old club.

Watford are still waiting for the Premier League to settle their complaint against Everton for the alleged illegal approach for Silva.

And the Silva feud threatened to spill onto the pitch after Watford captain Troy Deeney last week said he would "smash" Richarlison for leaving the Hornets.

Yet it was Richarlison who did the early damage as the Brazil forward put Everton ahead in the 15th minute with his eighth goal in 14 Premier League appearances -- three more than he managed in 38 games for Watford last season.

Watford were left frustrated by the goal as they appealed in vain for offside against Theo Walcott during a move that ended with Andre Gomes crossing for Richarlison to stroke a cool finish past Ben Foster.

Some players opt not to celebrate when they score against their former teams.

But in keeping with the fractious mood, Richarlison, who had been targeted by some crunching Watford tackles, had no qualms about sprinting away in jubilation.

Pereyra curled a free-kick just wide and Deeney saw his strike saved by Jordan Pickford after the interval.

Watford's pressure paid off in the 63rd minute when Pereyra met Kiko Femenia's cross with a shot that cannoned off the post and hit Coleman as he tried to control it before bouncing into the net.

Pereyra was the catalyst again with a cross that looped up to Doucoure, who rose above Coleman to head home from close-range.

The drama wasn't over and Everton squandered a chance to equalise when Christian Kabasele's foul on Yerry Mina earned the hosts a 68th-minute penalty.

Sigurdsson took the spot-kick, but his shot was too close to Foster and the Watford keeper saved with his legs.

But Everton kept pushing and were rewarded in the final seconds of stoppage-time when Kabasele handled and Digne curled a fine free-kick into the top corner for his first goal since his move from Barcelona.

Watford English Premier League Everton vs Watford, Game week 16 Football
Get the latest Cricket news, check out the India cricket schedule, Cricket live score . Like us on Facebook or follow us on Twitter for more sports updates. You can also download the NDTV Cricket app for Android or iOS.
Advertisement