Premier League: Manchester City beat Brentford 1-0 on Wednesday to extend their lead at the top of the Premier League to an ominous eight points as title rivals Chelsea conceded a last-gasp equaliser at home to Brighton. 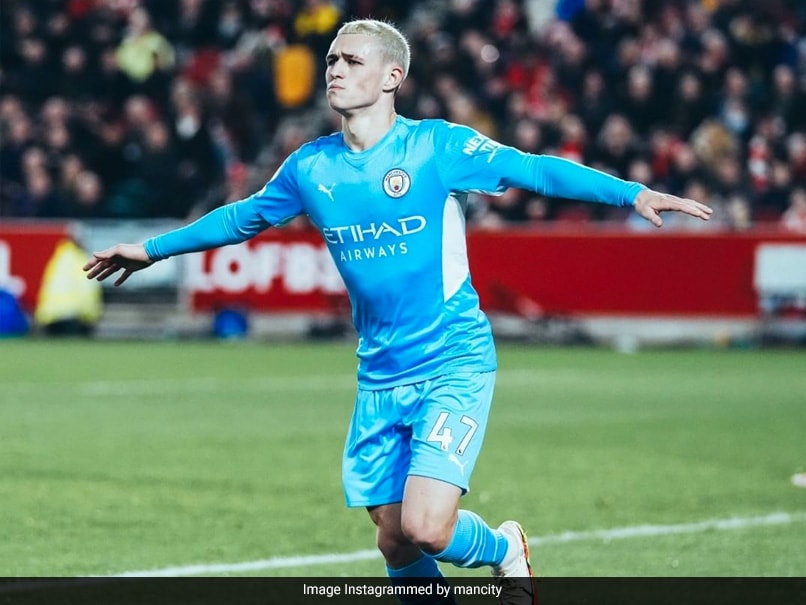 Manchester City beat Brentford 1-0 on Wednesday to extend their lead at the top of the Premier League to an ominous eight points as title rivals Chelsea conceded a last-gasp equaliser at home to Brighton. Phil Foden's first-half goal was enough to give Pep Guardiola's champions a 10th consecutive league win as they took full advantage of injury-hit Chelsea's slip-up at Stamford Bridge. The defending champions now have 50 points after 20 matches, putting them eight clear of second-placed Chelsea. Liverpool, who lost to Leicester on Tuesday, are a further point behind.

The coronavirus pandemic has ravaged English football's fixture list, leaving some clubs needing to play catch-up, but 2021 will end with City out on their own.

Brentford threatened in the opening stages in west London, but City took the lead in the 16th minute when Foden cleverly tucked in a pinpoint cross from Kevin De Bruyne.

Foden and Jack Grealish were left out of the starting XI for City's wins over Newcastle and Leicester after they were pictured on a night out following the 7-0 home victory over Leeds.

But the England pair were back on the teamsheet on Wednesday and Foden's goal made it a perfect 10 out of 10 for City.

Despite their dominance of possession, the visitors mustered just three shots on target in the entire game and Guardiola looked edgy in the latter stages as his team attempted to see out the victory.

They thought they had sealed the three points in the dying minutes when Aymeric Laporte rose to head home but his goal was ruled out by VAR for a marginal offside.

Guardiola, who hailed the "exceptional" Foden, refused to be complacent despite his side's huge lead at the top of the Premier League.

"There are 54 points to play for," he told the BBC. "It is not expected to have this distance for eight and nine, but Liverpool play one game less. But it is 54 points.

"In December no one is champion. We are going to lose games. I see in my mind Arsenal, Chelsea, Southampton coming.... I cannot say more than congratulations to the team but we must focus."

Thomas Tuchel's Chelsea, who kicked off 45 minutes before City, looked poised for victory after Romelu Lukaku headed them into a first-half lead but Brighton substitute Danny Welbeck struck in stoppage time for a 1-1 draw.

Chelsea wing-back Reece James limped off in the 27th minute with a hamstring injury, to be replaced by Marcos Alonso.

The home side went ahead immediately, when Lukaku shook off the attentions of Neal Maupay after a tussle to power a header past goalkeeper Robert Sanchez from a Mason Mount corner.

But Graham Potter's side came back strongly, with Adam Lallana and the impressive Yves Bissouma testing Chelsea goalkeeper Edouard Mendy either side of half-time.

It looked as though it was going to be a familiar story for Brighton, who have struggled to score this season, but substitute Welbeck had other ideas, heading home Marc Cucurella's cross in the 91st minute.

Tuchel counted the cost of further injuries to an already stretched squad after James limped off and Andreas Christensen had to be substituted at half-time.

The club announced on Tuesday that left wing-back Ben Chilwell faced surgery on a knee injury and defender Thiago Silva missed the Brighton game due to a thigh complaint.

"Very frustrating, of course very disappointing because we gave everything and we had enough big chances to decide the match," Tuchel told Amazon Prime.

"It was a very intense match and we have another two changes because of injuries (James and Christensen) so in the dressing room they are completely, completely exhausted but it is the same subject every single matchday now."

City travel to face fourth-placed Arsenal on Saturday knowing a win would take them 11 points clear of Chelsea, who host Liverpool the following day.

Chelsea English Premier League Football Phil Foden
Get the latest updates on ICC Women's Cricket World Cup 2022 and IPL 2022, check out the Schedule , Live Score and IPL Points Table. Like us on Facebook or follow us on Twitter for more sports updates. You can also download the NDTV Cricket app for Android or iOS.