Manchester City leapfrogged Liverpool on goal difference into third place and also moved four points clear of fifth-placed Manchester United as the battle to finish in the top four heats up. 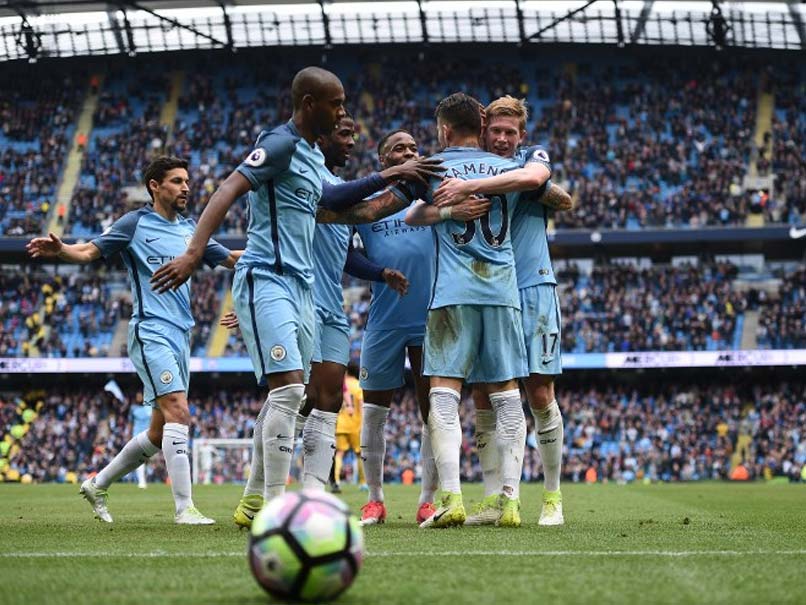 Manchester City improved their prospects of UEFA Champions League qualification with a 5-0 demolition of Crystal Palace, while Swansea City's 1-0 win over Everton pushed Hull City into the Premier League relegation zone on Saturday. Frustrated by damaging draws in their previous two games, City got back on track and climbed to third in the table after a stylish display inspired by David Silva's return from injury at Eastlands. Silva, out for a fortnight after suffering a blow to his knee during the FA Cup semi-final defeat by Arsenal, opened the scoring after two minutes.

Pep Guardiola's side also moved four points clear of fifth-placed Manchester United as the battle to finish in the top four heats up.

United, who travel to Arsenal, and Liverpool, who host Southampton, are both in action on Sunday.

"Today was important because we are playing for the future of the club," Guardiola said.

"The Premier League is tough. There are four amazing teams fighting for the final two places in the top four."

Palace's third successive defeat left them four points above the relegation zone and still not certain to stay up.

At the KCOM Stadium, already-relegated Sunderland won 2-0, securing their first victory in 11 games to leave Hull in severe danger of joining them in the Championship next season.

Hull boss Marco Silva had been unbeaten in his previous 41 home league games, a record dating back to his time in charge of Portuguese side Estoril in 2014 and encompassing spells with Sporting Lisbon and Olympiakos.

Having taken 19 points from a possible 21 at home during his four months as Hull boss, it was a shock to the Portuguese coach when his side fell behind in the 69th minute.

John O'Shea flicked on a corner and Billy Jones launched into a diving header that flashed past Eldin Jakupovic.

Abel Hernandez was denied an equaliser by Jordan Pickford's superb save and Jermain Defoe steered in from an offside position to add to Hull's misery two minutes into stoppage time.

"Ultimately there was big tension in some of the team. We need to be calm in some moments," Silva said.

"It's an important moment for us. We didn't achieve what we wanted but we have two more games."

Just hours after the final whistle in Hull, there was even worse news for the Tigers from the Liberty Stadium as Swansea climbed out of the bottom three.

Fernando Llorente won it for Paul Clement's team after 29 minutes with a close-range header from Jordan Ayew's cross.

Fourth-bottom Swansea are one point clear of Hull with two games remaining.

"When it comes to squeaky bum time it takes men to stand up and we did that," Swansea defender Alfie Mawson said.

Bournemouth secured their top-flight status for another year after a 2-2 draw against Stoke City at Dean Court.

When a Stoke corner curled into the penalty area in the 33rd minute, Bournemouth's Lys Mousset glanced the ball into his own net, giving the visitors their first away league goal in more than 10 hours.

Junior Stanislas equalised for Bournemouth in the 62nd minute before Stoke's Mame Biram Diouf bundled in his first goal for 12 months in the 73rd minute.

Eddie Howe's side rescued their priceless point thanks to an 81st-minute own goal from Stoke defender Ryan Shawcross.

Burnley were made to wait to confirm their survival after being held to a 2-2 draw by West Bromwich Albion at Turf Moor.

Comments
Topics mentioned in this article
Manchester City Swansea City Sunderland Everton Crystal Palace Hull City Tigers English Premier League Football
Get the latest updates on SA vs IND 2021-22, check out the Schedule and Live Score . Like us on Facebook or follow us on Twitter for more sports updates. You can also download the NDTV Cricket app for Android or iOS.