Liverpool captain Jordan Henderson had a stoppage-time winner ruled out for offside as Everton twice came from behind to salvage their unbeaten start to the Premier League season on Saturday. 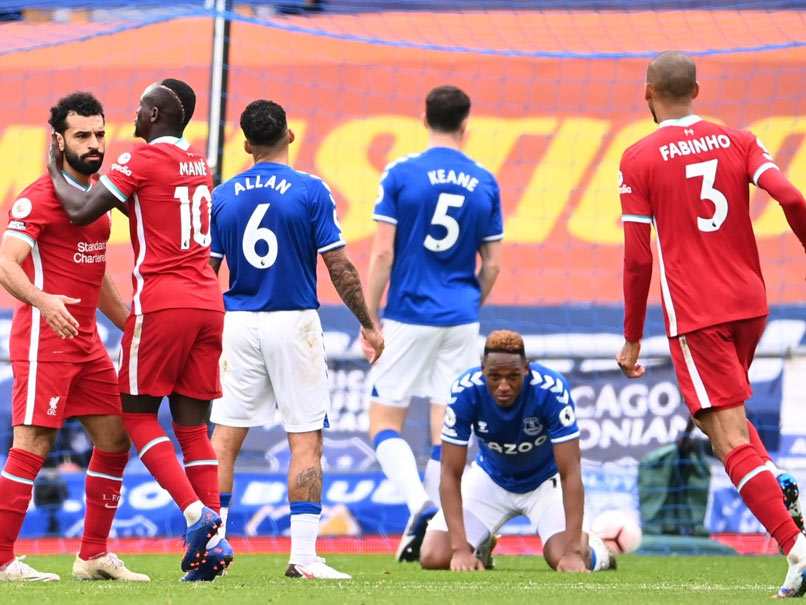 Liverpool captain Jordan Henderson had a stoppage-time winner ruled out for offside as Everton twice came from behind to salvage their unbeaten start to the Premier League season on Saturday in a pulsating Merseyside derby that ended 2-2. Everton have still not won a derby for 10 years, but manager Carlo Ancelotti will be the happier of the two managers to escape with a point after Henderson's strike did not stand for the most marginal of offside calls against Sadio Mane in the build-up following a VAR review.

A share of the spoils means Everton remain three points clear of their city rivals at the top of the table.

Liverpool were smashed 7-2 by Aston Villa in their last game before the international break, but started like a side keen to make amends.

Mane missed the Villa Park mauling after testing positive for coronavirus and the Senegalese showed why he was badly missed with a smart finish from Andy Robertson's cut-back to open the scoring.

Everton had a major let off moments later when Virgil Van Dijk was on the receiving end of a dangerous late lunge from Jordan Pickford as a free-kick was swung into the box.

However, no penalty was awarded on a VAR review because Van Dijk had been marginally offside and Pickford also incredibly avoided a red card.

Ancelotti's men made the most of that reprieve to level on 19 minutes when Michael Keane's header from James Rodriguez's corner had too much power for Adrian.

But it was Liverpool who remained the more dangerous side for the remainder of the first-half. Pickford leapt to his right to make a stunning save from Trent Alexander-Arnold's free-kick before Mane then had a similar chance to the opening goal only to this time skew Robertson's cross wide.

Dominic Calvert-Lewin's nine goals have been a major part of Everton's flying start to the season, but the newly-capped England international missed a huge chance to put the home side in front as he failed to connect with Lucas Digne's low cross five minutes into the second-half.

James has been a player reborn since his move from Real Madrid to join up with Ancelotti at a third club and the Colombian's sumptuous cross nearly teed up Richarlison for the winner, but the Brazilian's header came back off the outside of the post.

Those chances looked set to come back to haunt Everton as a moment of magic from Mohamed Salah put Liverpool back in front 18 minutes from time.

Alexander-Arnold's cross was cut out by Yerry Mina but broke to the Egpytian on his left and he arrowed a shot into the far corner for his sixth goal in five appearances this season.

Pickford kept Everton in the game with an incredible save from Joel Matip's header and then to parry another piledriver from Salah.

That proved crucial as Calvert-Lewin produced an incredible leap and header from Digne's cross to level once more.

Everton did finish the game down to 10 men as Richarlison was shown a straight red card for another dangerous lunge, this time on Thiago Alcantara.

Henderson thought he had won the game when Pickford failed to keep out his England teammate's low shot in stoppage time.

However, the drama did not end there as VAR deemed Mane to be offside as he provided the cross.

Everton Mohamed Salah Sadio Mane Jordan Henderson James Rodriguez English Premier League Football Jurgen Klopp Carlo Ancelloti
Get the latest updates on IPL Auction 2023 and check out  IPL 2023 and Live Cricket Score. Like us on Facebook or follow us on Twitter for more sports updates. You can also download the NDTV Cricket app for Android or iOS.