English Premier League: Liverpool celebrated the return of a full house to Anfield by extending their 100 percent start to the Premier League season as goals from Diogo Jota and Sadio Mane saw off Burnley 2-0. 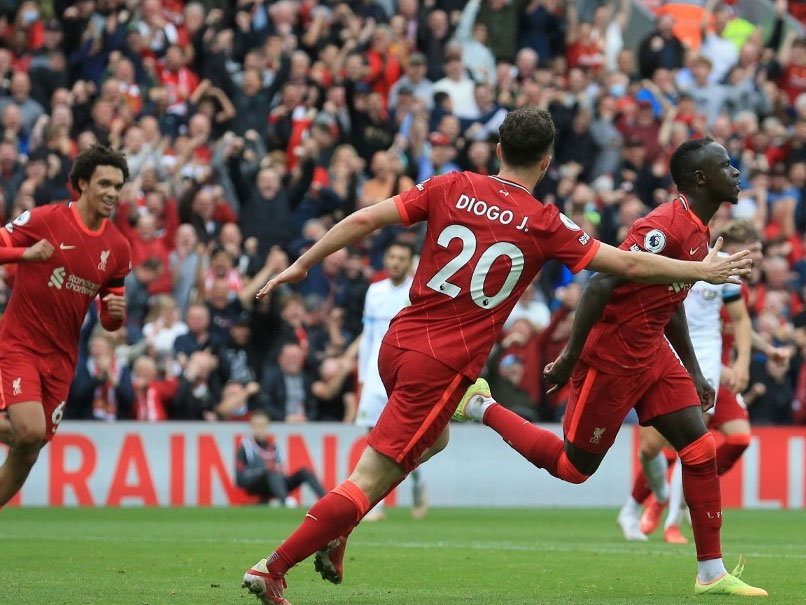 Liverpool celebrated the return of a full house to Anfield by extending their 100 percent start to the Premier League season as goals from Diogo Jota and Sadio Mane saw off Burnley 2-0 on Saturday. Jota's header opened the scoring against the run of play after a bright Burnley start and Mane finally made Liverpool's dominance after the break count 21 minutes from time to take Jurgen Klopp's men top of the table with six points from two games this season.

In front of a first capacity crowd since March 2020, an emotional pre-match tribute was paid to former players who passed away over the past 17 months as well as Andrew Devine, the 97th victim of the Hillsborough disaster, who died in July.

Burnley ended Liverpool's 68-game unbeaten run at Anfield in the Premier League on their last visit in January, which gave way to a club record six straight home defeats for the Reds.

The Clarets were also the only visiting side to come away from Anfield with a point the season before when Liverpool romped to the title for the first time in 30 years.

Sean Dyche's men surrendered an early lead to lose their opening game of the season 2-1 at home to Brighton, compounding fears for their future in the top flight after a summer of little investment from the club's new American owners.

However, the visitors were not shaken by the return of full stands roaring on the hosts in the opening stages.

Dwight McNeil struck the post and Alisson Becker was forced to turn behind Ashley Barnes's header at the near post.

But Dyche will have been livid at the manner in which his side conceded on 18 minutes as Kostas Tsimikas was given too much time to measure a perfect cross and Jota ran across Ben Mee to flick a header into the far corner.

Liverpool then began to find their rhythm as only a VAR review denied Mohamed Salah doubling the lead as the Egyptian had just strayed offside before blasting home Harvey Elliott's pass.

Mane was next to threaten as he fired Trent Alexander-Arnold's teasing through ball just over the bar.

A series of injuries to centre-backs saw Liverpool's title defence come off the rails last season, most notably to Virgil van Dijk.

The Dutchman celebrated his return from a long-term knee injury with a clean sheet in a comfortable 3-0 win at Norwich last weekend.

But Van Dijk and his teammates at the back still looked shaky when put under pressure.

James Tarkowski's header dropped just wide after beating Alisson to a free-kick launched into the box just before the break.

Early in the second-half, Burnley did have the ball in the net only for the offside flag to this time go against them when Barnes slotted high past Alisson.

Liverpool soon regained the ascendency and should have ran out even more comfortable winners.

Mane's dip in form was another reason for the Reds' struggles in finishing a distant third last season.

The Senegalese had passed up two big chances to net his first goal of the season before he made sure of the three points by slamming home Alexander-Arnold's perfectly measured through ball.

Mane should have had another when he failed to connect with Salah's low cross.

But Alisson also had to be at this best to secure another clean sheet as he flew off his line to deny Barnes in a one-on-one deep into stoppage time.

Burnley Sadio Mane Mohamed Salah English Premier League Football
Get the latest updates on T20 World Cup, check out the T20 World Cup Schedule and Live Score . Like us on Facebook or follow us on Twitter for more sports updates. You can also download the NDTV Cricket app for Android or iOS.