Liverpool agreed a deal to sign Morocco winger Oussama Assaidi from Dutch club Heerenveen for an undisclosed fee on Thursday. 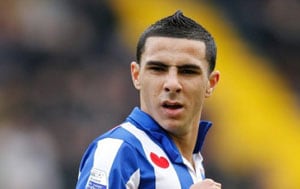 Liverpool agreed a deal to sign Morocco winger Oussama Assaidi from Dutch club Heerenveen for an undisclosed fee on Thursday.

Assaidi has to pass a medical before the transfer can be rubber-stamped, but if it is completed successfully he will become new boss Brendan Rodgers' third signing since he took over from Kenny Dalglish in June.

"Liverpool Football Club have reached an agreement with SC Heerenveen for the transfer of winger Oussama Assaidi, subject to the player passing a medical," a statement on the club's website confirmed.

The 24-year-old Assaidi scored 20 goals in 68 appearances for Heerenveen and has 22 caps for Morocco since making his international debut in February 2011.

Rodgers had admitted earlier on Thursday that he hoped to sign two players within the next 48 hours and he appears to have already secured the first.

Comments
Topics mentioned in this article
Football Manchester City Alex Ferguson Mark Hughes Liverpool Oussama Assaidi Joe Allen English Premier League
Get the latest updates on ICC T20 Worldcup 2022 and CWG 2022 check out the Schedule, Live Score and Medals Tally. Like us on Facebook or follow us on Twitter for more sports updates. You can also download the NDTV Cricket app for Android or iOS.