Leicester City are just a point behind leaders Liverpool after winning five of their first seven games in a top-flight season for the first time in their history. 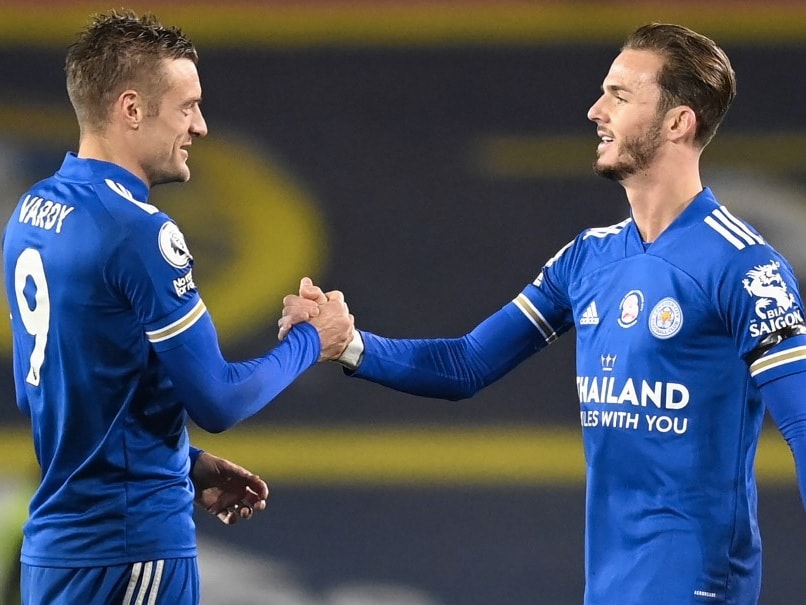 Leicester City swept into second place in the Premier League with an impressive 4-1 victory at Leeds.© AFP

Leicester City swept into second place in the Premier League with an impressive 4-1 victory at Leeds, while Fulham beat West Bromwich Albion 2-0 to finally clinch their first win of the season on Monday. Brendan Rodgers' side are just one point behind leaders Liverpool after winning five of their first seven games in a top-flight season for the first time in their history. Harvey Barnes and Youri Tielemans put Leicester two up before half-time at Elland Road. Stuart Dallas got one back for Leeds but Jamie Vardy's eighth goal of the season and a late Tielemans penalty wrapped up Leicester's fourth successive away league win.

After the disappointment of missing out on a place in the Champions League last term, Leicester have shown they are capable of mounting another top four challenge.

Even a title push might not be impossible given they have already thrashed Manchester City 5-2.

"We were technically brilliant. We had the quality to play when we had the opportunities. I thought we were amazing right across the team," Rodgers said.

"This team has got an amazing mentality with lots of young, hungry players. It's still very early and most of our games have been away but we've had brilliant performances."

Leeds boss Marcelo Bielsa said: "In the first 30 minutes we defended poorly and after we didn't create enough danger. That is one of the main responsibilities of the manager."

Leicester made the perfect start in the third minute.

A poor back-pass from Robin Koch was intercepted by Vardy and he rounded keeper Illan Meslier before squaring for Barnes to tap into the empty net.

Leicester didn't have to wait long to double their lead in the 21st minute.

Marc Albrighton's cross picked out Vardy at the near post and his diving header was unconvincingly pushed out by Meslier to Tielemans, who slotted home from close range.

Dallas gave Leeds a lifeline in the 47th minute when his cross evaded everyone and looped past the flat-footed Schmeichel.

Leeds had the momentum and Pablo Hernandez almost equalised with a curling strike from the edge of the area.

But Leicester weathered the storm and Vardy struck in the 76th minute with a close-range finish after Cengiz Under flicked James Maddison's pass over Meslier.

Belgian midfielder Tielemans got the fourth with a stoppage-time spot-kick after Mateusz Klich's foul on Maddison.

'We have to wake up'

At Craven Cottage, Fulham avoided their worst start to a season since 1951 thanks to first half goals from Bobby Decordova-Reid and Ola Aina.

Scott Parker's side deservedly ended a run of six games without a win -- a dismal stretch including five defeats -- since their promotion from the Championship last term.

The Cottagers had lost all three of their previous home games this season, but their first success in west London lifted them out of the relegation zone.

"We knew how important this game was. I'm pleased we got a result. We played very well," Parker said.

"Defeats are going to happen but they can't bury us. Wins breed confidence."

"We have to wake up. We have to be much better than this. Everything starts with work rate, commitment and dedication," Albion manager Slaven Bilic said.

Fulham went ahead in the 26th minute through Decordova-Reid.

Antonee Robinson fired in a cross from the left to an unmarked Aleksandar Mitrovic at the far post, who nodded across goal before the ball was turned in by Decordova-Reid.

Four minutes later, Fulham doubled their lead when Nigerian defender Aina blasted his shot past Sam Johnstone from the edge of the area.

West Bromwich Albion Jamie Vardy English Premier League Football
Get the latest updates on ICC T20 Worldcup 2022, check out the Schedule and Live Score. Like us on Facebook or follow us on Twitter for more sports updates. You can also download the NDTV Cricket app for Android or iOS.