Kyle Walker established himself as the first choice right-back at Spurs under Mauricio Pochettino, but their relationship deteriorated towards the end of last season. 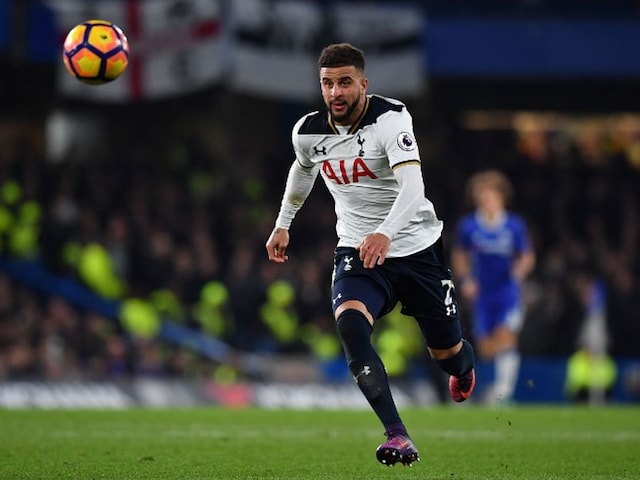 England international Kyle Walker signed for Manchester City from Tottenham Hotspur on Friday in a deal that could see him become the world's most expensive defender. The 27-year-old right-back signed a five-year contract for a fee that could rise with add-ons to 54 million pounds (USD 70m, 61m euros), according to The Times and other media. The 27-times capped Walker -- who will leave with City on their pre-season tour of the United States on Monday -- is to be paid a reported 150,000 pounds a week.

"I am thrilled to be signing for City and can't wait to get started," Walker told the club website.

"Pep Guardiola is one of the most respected managers in the world and I feel he can help me take my game to a new level."

City director of football Txiki Begiristain said they had been tracking Walker for a while.

"Kyle is a fine full-back, one capable of producing quality at both ends of the pitch," he told the club website.

"We've followed his progress at Tottenham and have been really impressed by how he has developed.

"He is now one of the best right-backs in the Premier League and justifiably an England regular.

"I am sure he will be a success at Manchester City this season and beyond."

Walker, who joined Spurs alongside Kyle Naughton in 2009 for 9m pounds from Sheffield United, will cost an initial 45m pounds with another 5m pounds due in a year's time and 4m pounds due in add-ons, according to The Times.

That would break the record 50m pounds paid by Paris Saint-Germain to Chelsea for Brazilian defender David Luiz in 2014, while also eclipsing the 49m pounds forked out by City to Liverpool for Raheem Sterling in 2015, the most for an English player.

Walker established himself as the first choice right-back at Spurs under Mauricio Pochettino, but their relationship deteriorated towards the end of last season.

Kieran Trippier was selected ahead of Walker in both the FA Cup semi-final against Chelsea and then in the north London derby with Arsenal the following week.

Walker's arrival will be expensive consolation for Guardiola after missing out on veteran Brazilian defender Dani Alves, who snubbed his former Barcelona boss to join PSG on a free transfer following his departure from Juventus.

Having failed to win a trophy as a manager for the first time last season, Guardiola admitted that at a bigger club like Barcelona or Bayern Munich he could have faced the sack.

Guardiola will not be done with flexing the financial muscle of the Abu Dhabi-owned club as he is also keen to lure Monaco defender Benjamin Mendy for 40m pounds.

The 22-year-old French international left back will complete Guardiola's expensive rebuilding of his defence having let experienced full-backs Pablo Zabaleta, Bacary Sagna and Gael Clichy leave at the end of last season.

Should he succeed in signing Mendy it would take his close-season spending to over 168m pounds.

Comments
Topics mentioned in this article
England Tottenham Hotspur Manchester City Kyle Walker Pep Guardiola English Premier League Football
Get the latest Cricket news, check out the India cricket schedule, Cricket live score . Like us on Facebook or follow us on Twitter for more sports updates. You can also download the NDTV Cricket app for Android or iOS.