Brighton remain ninth in the Premier League standings, seven points above the relegation zone and three points above Mark Hughes's Stoke City, who stay in 15th. 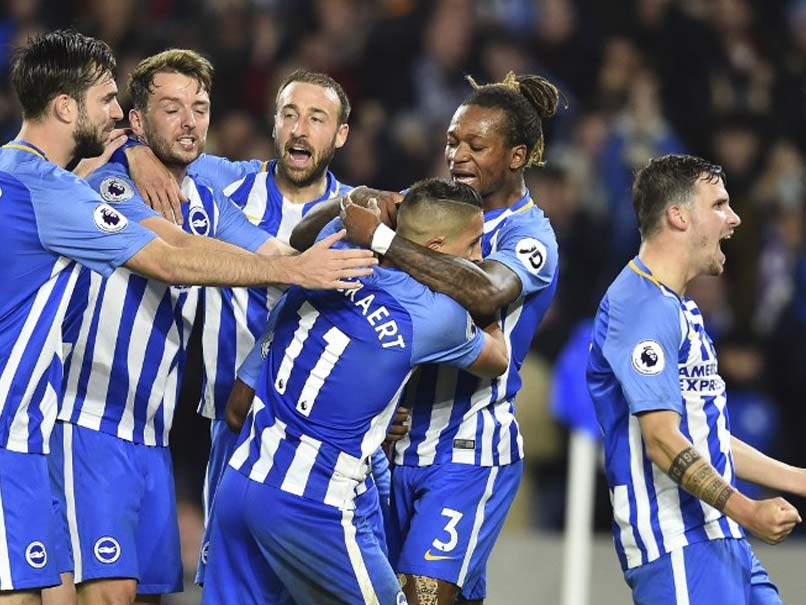 Jose Izquierdo earned Brighton and Hove Albion a point as Chris Hughton's side twice came from behind to record a 2-2 draw against visitors Stoke City in the Premier League on Monday. Stoke twice went ahead at the Amex Stadium, first through Eric Maxim Choupo-Moting and then Kurt Zouma, but Brighton hit back on each occasion via goals from Pascal Gross and Izquierdo. Brighton -- promoted from the Championship last season -- remain ninth, seven points above the relegation zone and three points above Mark Hughes's Stoke, who stay in 15th.

"When you have been behind twice you have to show character and we did," Hughton told Sky Sports.

"We have to be realistic. We are playing against better teams and better players and if you can't win games then don't lose them."

The outcome of a lively game on the English south coast means Brighton have gone five consecutive matches unbeaten in the top flight for the first time since March to April 1983.

There were opportunities at both ends in the early stages, but Brighton seemed to be getting the upper hand when Stoke drew first blood in the 28th minute.

Xherdan Shaqiri's fine, raking pass from the halfway line fell perfectly into the path of Choupo-Moting, who expertly plucked the ball from the sky before planting a shot past Mat Ryan.

The home fans -- and players -- were enraged when Glenn Murray appeared to be felled inside the box by Stoke captain Ryan Shawcross, only for referee Lee Mason to award a goal-kick.

Anger turned to celebration in the 44th minute when Brighton midfielder Davy Proepper's twinkle-toed run took him into space on the right and his low cross was driven past Lee Grant by Gross.

But within two minutes the visitors had restored their lead, a corner striking Brighton captain Bruno on the back and Zouma throwing himself at the loose ball to head in his first Stoke goal.

Brighton goalkeeper Ryan kept his side in touch by blocking from Ramadan Sobhi early in the second half and on the hour the hosts drew level again.

After Zouma had failed to cut out a high ball, Izquierdo's attempted cross from the left came back to him and the Colombia winger lashed the ball past Grant.

Shaqiri lashed narrowly wide from outside the box, but despite the introduction of Peter Crouch -- who made a Premier League record 143rd substitute appearance -- Stoke could not get their noses back in front.

"Brighton didn't create much, so we are disappointed with their goals," said Stoke manager Hughes.

"It's an away point and you have to be happy with that."

Comments
Topics mentioned in this article
Brighton & Hove Albion Stoke City English Premier League Football
Get the latest updates on ICC T20 Worldcup 2022 and CWG 2022 check out the Schedule, Live Score and Medals Tally. Like us on Facebook or follow us on Twitter for more sports updates. You can also download the NDTV Cricket app for Android or iOS.