In a thrilling conclusion, top four places, Europa League berths, relegation spots and the Golden Boot have to be settled in the last round of matches. 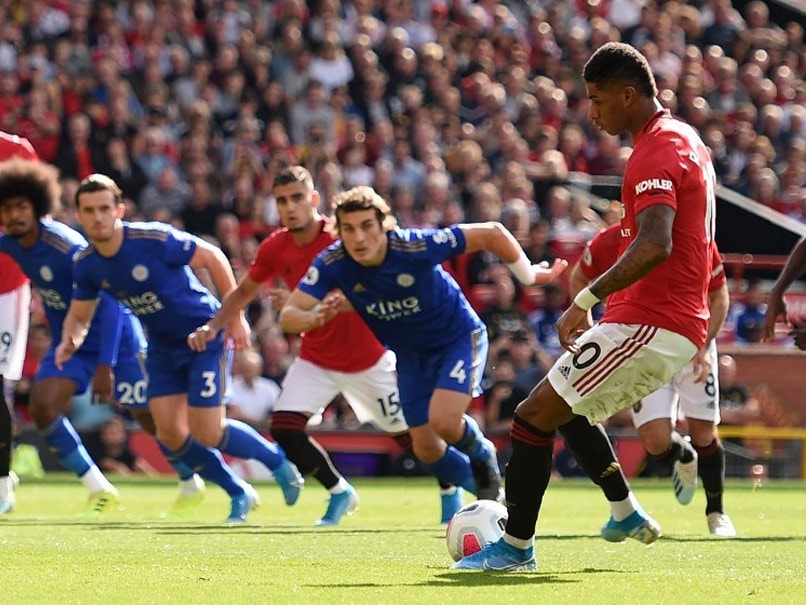 Manchester United and Leicester will battle it out for a place in the Champions League.© AFP

The Premier League's longest season is set for a dramatic finish on Sunday as Chelsea, Manchester United and Leicester compete for Champions League places, while Aston Villa, Watford and Bournemouth fight to avoid relegation. At a time of year when Premier League clubs are usually jetting off for lucrative pre-season tours, the 2019-20 top-flight campaign will finally come to an end after the three-month coronavirus delay. Liverpool have been presented with the Premier League trophy, second placed Manchester City are guaranteed a Champions League spot and Norwich have been relegated, but there are several key issues still to be resolved.

In a thrilling conclusion, top four places, Europa League berths, relegation spots and the Golden Boot have to settled in the last round of matches.

The spotlight will be firmly on the King Power Stadium, where fifth placed Leicester host third placed Manchester United.

Ole Gunnar Solskjaer's team will return to the Champions League after a one-year absence if they avoid defeat, but a Leicester win would take them back into Europe's elite club competition for the first time since 2016-17.

United looked jaded in the past week, but Solskjaer urged his team to finish the job after they climbed into the top four for the first time since September.

"We're looking forward to the game, we've given ourselves a good chance of being in the Champions League next year," he said.

"We want to go there and dominate. We're not going to change our approach."

United have a fall-back plan as they would also qualify for the Champions League if they win this season's Europa League, which resumes in August.

Go for the win

Despite holding a top four spot for most of the season, Leicester manager Brendan Rodgers insisted it would not be a failure if his spluttering side miss out.

"It wasn't really something we spoke about at the beginning of the season because naturally, where the club had been these last few seasons, we wanted to try step-by-step to arrive there," Rodgers said.

Fourth placed Chelsea need a point at home to Wolves to seal a top four finish, but should Frank Lampard's men lose, then a draw between Leicester and United would see those two qualify for the Champions League at the expense of the west Londoners.

It could be a nervous afternoon for Lampard, but he is staying positive: "We're aware of the situation, but we try and win. I don't think there's any other way to approach the game."

Whoever misses out on the Champions League between United, Chelsea and Leicester will have to settle for fifth place and Europa League qualification next season.

Sixth placed Wolves would be certain of the other Europa League berth if they beat Chelsea.

However, a slip from Nuno Espirito Santo's men would give Tottenham the chance to move above them if they win at Crystal Palace, who have lost their last seven games.

At the bottom, fourth bottom Villa go to West Ham knowing they should be safe if they match third bottom Watford's result at Arsenal.

However, Villa are only just ahead of Watford on goal difference, with Dean Smith's men on -26 and the Hornets -27.

Even if both teams win, Watford, without a permanent manager after Nigel Pearson's sacking, could still survive if their margin of victory is two better than Villa's.

"The most important thing is to be above that dotted line on Sunday and we know we have to win to guarantee that," Smith said.

If Villa and Watford lose, then second bottom Bournemouth, currently three points adrift, could stay up on goal difference if they win at Everton.

"The next game is the biggest game of all our careers," Bournemouth boss Eddie Howe said.

In the race to finish as the league's top scorer, Leicester's Jamie Vardy leads the way with 23 goals, two ahead of Southampton's Danny Ings.

Bournemouth English Premier League Football
Get the latest updates on Fifa Worldcup 2022 and check out  Fifa World Cup Schedule, Stats and Live Cricket Score. Like us on Facebook or follow us on Twitter for more sports updates. You can also download the NDTV Cricket app for Android or iOS.