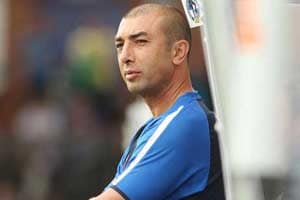 Di Matteo had hoped to sign Wigan forward Victor Moses in time for this weekend's opening round of Premier League matches, but instead the Nigerian will line up against the European champions when they travel to the DW Stadium on Sunday.

Wigan owner Dave Whelan has angered Chelsea by talking publicly about their negotiations over Moses in a bid to drive up the 21-year-old's transfer fee.

Whelan claims Chelsea may lose Moses to a rival bidder unless they stop messing about, but Di Matteo, who has also been frustrated in his attempts to sign Porto forward Hulk and Marseille right-back Cesar Azpilicueta, is adamant Abramovich won't be held to ransom.

The Russian has already sanctioned £60 million ($94.1m) worth of spending on Eden Hazard, Oscar and Marko Marin since the end of last season, but he won't let other clubs take advantage of his desire to rebuild Di Matteo's squad.

"I think that goes for many teams, not just for us. We're not going to pay over the top," Di Matteo said on Friday.

"What we think is the real value for a player, we have paid."

Di Matteo also refused to be drawn on any developments in Chelsea's interest in Moses, Hulk and Azpilicueta, saying: "There won't be anybody coming in for Sunday."

Moses may not relish the prospect of playing against a club he could be joining before the transfer window closes on August 31, but Di Matteo knows Chelsea's defenders will still have to keep a close eye on their potential signing.

"We've played against him before - we know very well what ability he has," he said. "He's a young, talented guy... that plays for Wigan."

Di Matteo wouldn't say if Chelsea had considered a bid for Robin van Persie before the Dutch forward left Arsenal for Manchester United this week.

"Personally, I still believe that Man City is the favourite because they haven't lost any key players," he said. "But, certainly, van Persie is a good signing for United."

Di Matteo will have one new player to choose from on Sunday, with £25 million midfielder Oscar having arrived at Chelsea on Thursday after spending the past few weeks on Olympic duty with Brazil.