Leicester's players huddled together in celebration at full-time, with many of them due to fly to Thailand to join Vichai's funeral. 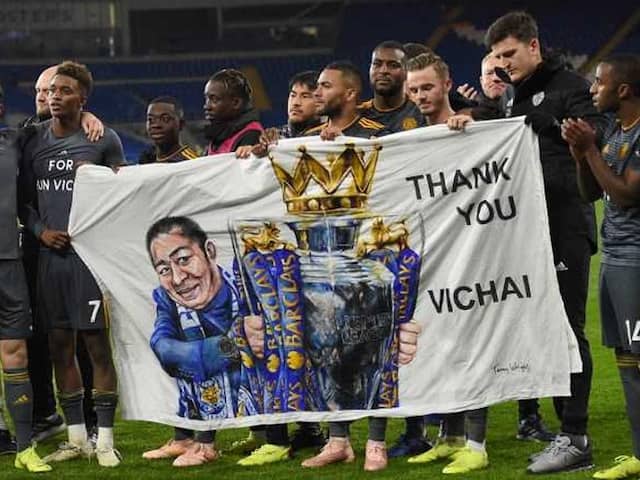 Leicester City paid an emotional tribute to Vichai Srivaddhanaprabha as the grief-stricken club won 1-0 at Cardiff in the Premier League following their owner's tragic death. Thai billionaire Vichai was among five people killed when his helicopter crashed outside Leicester's King Power Stadium following last Saturday's match against West Ham. The horrific accident triggered a week of mourning in Leicester and around the world of football. With Vichai's funeral underway on Saturday in Bangkok, Leicester headed to Cardiff for a match that served as a chance to honour their late owner and begin the healing process.

While results have been rendered irrelevant by the crash, it was fitting that Leicester took the points in their first match since Vichai's death, thanks to Demarai Gray's second-half winner at the Cardiff City Stadium.

Leicester goalkeeper Kasper Schmeichel felt the tragedy more than most as he witnessed the immediate aftermath of the crash moments after the helicopter went down.

"I feel proud. It's been a really tough week for everyone. The way everyone at the club handles themselves is a testament to the family Vichai built," Schmeichel said.

"That took a lot. It has been an emotional day. I'm glad we got three points for him.

"I can't imagine what his family are going through. We did it for him and his family."

Leicester's players had worn white t-shirts bearing Vichai's image and the words "The Boss" on the front of them during the pre-match warm-up.

On the back an inscription read "Khun Vichai You Will Be Forever In Our Hearts".

A minute's silence was impeccably observed, with a wreath laid on the pitch and images of Vichai shown on the scoreboards behind either goal.

Leicester's players and staff linked arms on the centre circle to pay tribute during a poignant silence that left Schmeichel in tears.

Two giant flags in memory of Vichai were unfurled, one of them being passed from Cardiff supporters to their Leicester counterparts, as the game got underway.

Claude Puel's team, playing with poise and desire despite their traumatic week, finally had a cathartic moment in the 55th minute.

A superb cross from Ben Chilwell was finished off by Gray, who celebrated by lifting his shirt to reveal a message that read "For Vichai".

It earned Gray a booking from referee Lee Probert in a move that followed the letter of the law, but showed little common sense given the circumstances.

Leicester's players huddled together in celebration at full-time, with many of them due to fly to Thailand to join Vichai's funeral immediately after the game.

Cardiff City Demarai Gray English Premier League Cardiff City vs Leicester City, Game week 11 Football
Get the latest Cricket news, check out the India cricket schedule, Cricket live score . Like us on Facebook or follow us on Twitter for more sports updates. You can also download the NDTV Cricket app for Android or iOS.