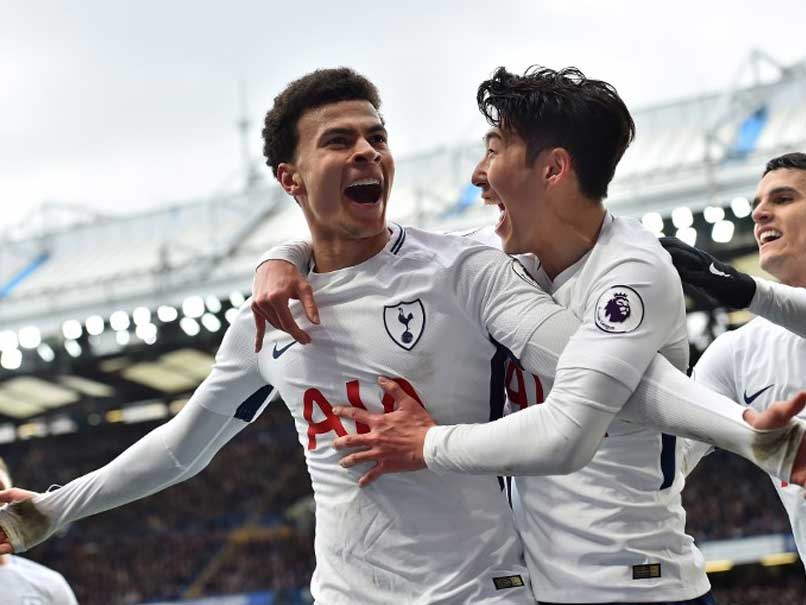 Dele Alli scored twice in four second-half minutes as Tottenham Hotspur beat Chelsea 3-1 on Sunday to end a 28-year wait for a Premier League win at Stamford Bridge. Defeat for the hosts all but ends Chelsea's hopes of Champions League football next season as Spurs opened up an eight-point lead over their closest challengers for fourth place. Ending their long wait for a win at their London rivals is just the latest sign of the progress made under Mauricio Pochettino as Spurs look set to seal a place in the Champions League for a third straight season.

And it was even more impressive as they came from behind as a huge error from captain Hugo Lloris gifted Alvaro Morata the opening goal.

Spurs could even afford the luxury of doing the damage without Harry Kane, who made his return from a three-week layoff with ankle ligament damage 16 minutes from time.

Alli was pushed into a more advanced role than his usual roving role behind Kane and had the first chance but couldn't direct Eriksen's cross goalwards.

Chelsea were the side far more in desperate need of the points and that began to show as the first-half developed.

Willian and Victor Moses forced Lloris into comfortable saves, whilst Marcos Alonso also saw a goal ruled out for offside.

However, the French number one was clearly at fault when the opener arrived on the half hour mark.

Morata hadn't scored in the Premier League since Boxing Day, but no one has scored more headed goals in the league this season and he was left with the easiest of tasks to nod into an empty net as Lloris flapped at Moses's cross.

Arsenal warmed up for their crucial Europa League quarter-final with a flattering 3-0 victory against relegation-threatened Stoke on Sunday.

Three goals in the final 15 minutes put a gloss on a largely soporific performance at a well-below capacity Emirates Stadium.

Pierre-Emerick Aubameyang scored the first two, including a penalty opener.

Substitute Alexandre Lacazette netted the third, also from the spot, after he had been fouled.

Arsenal clinched back to back league wins for the first time since November.

But the result left both clubs in the same positions in the Premier League table, with Arsenal sixth and Stoke second bottom.

The Gunners will have to play better in the first leg against CSKA Moscow on Thursday in Europe.

With little chance of finishing in the Premier League's top four, Arsenal must win the Europa League to qualify for next season's Champions League -- a target that looks essential for under-fire Gunners boss Arsene Wenger as he fights to save his job.

Jack Wilshere may have missed both England's friendlies with the Netherlands and Italy but the Arsenal midfielder recovered from a knee niggle to claim the captain's armband for the day, with goalkeeper Petr Cech absent and defender Laurent Koscielny on the bench.

Stoke's preparations had seen Ibrahim Afellay jettisoned by manager Paul Lambert for not trying in training, but Eric Pieters was restored to the starting line-up after being fined for going clubbing before the previous match.

The game's first chance belonged to Stoke, the team with the greater need of three points, as Mame Biram Diouf laid the ball back to Xherdan Shaqiri, who shifted the ball onto his preferred left foot and curled it inches wide of David Ospina's right-hand post.

Stoke continued to take the game to the hosts, who were giving away possession cheaply.

Aaron Ramsey and Wilshere were both culpable in the first 15 minutes.

Arsenal almost took an undeserved lead when Stoke goalkeeper Jack Butland produced a punch that will not have improved his chances of being England's number one in the World Cup.

It landed at Ramsey's feet on the right of the six-yard box and the Welshman's hook cleared the goalkeeper and bounced off the top of the crossbar.

Comments
Topics mentioned in this article
Chelsea Tottenham Hotspur Arsenal Stoke City Dele Alli Pierre-Emerick Aubameyang English Premier League Football
Get the latest updates on ICC T20 Worldcup 2022, check out the Schedule and Live Score. Like us on Facebook or follow us on Twitter for more sports updates. You can also download the NDTV Cricket app for Android or iOS.