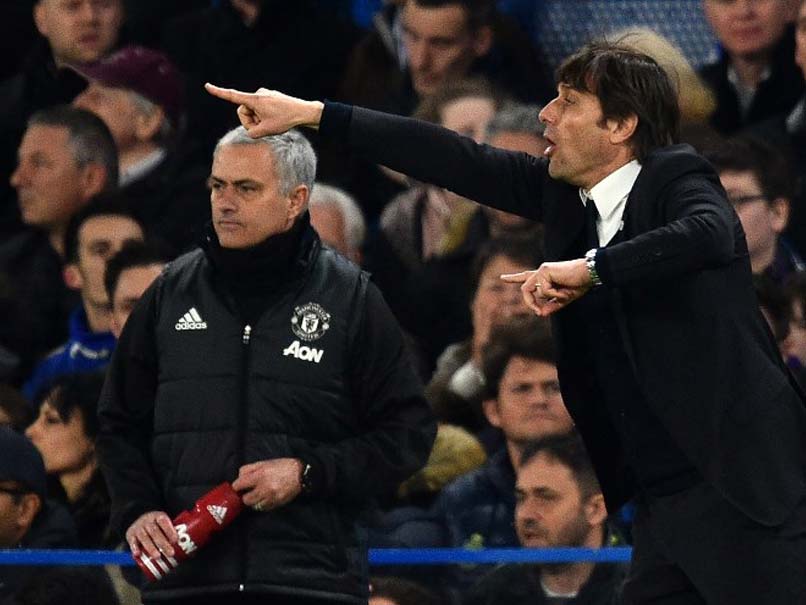 Antonio Conte and Jose Mourinho will be hoping their strikers return to form on Sunday.© AFP

Alvaro Morata and Romelu Lukaku will be under pressure to fire their teams back into the Premier League title race when the misfiring strikers clash in Chelsea's showdown with Manchester United on Sunday. Chelsea forward Morata and United front man Lukaku were the toast of their clubs after celebrating their close-season transfers with a barrage of goals. But, with Chelsea and United battling to keep pace with leaders Manchester City, Morata and Lukaku have lost their midas touch at the wrong moment, putting them under the microscope at Stamford Bridge this weekend.

Lukaku was off to a fast start, netting 11 times in his first 10 games.

However, the 24-year-old finds himself in the midst of a barren spell stretching back six games to the end of September.

United fans have grown frustrated by Lukaku's lack of contributions outside the penalty area, prompting Mourinho to chastise Old Trafford crowd for failing to give the striker enough support in last weekend's win over Tottenham.

Lukaku responded to the doubters by admitting he is still a work in progress.

"You can't judge me as the finished article. I'd rather have a career where year after year I improve rather than going to the top and decline," he said.

"I know I have a lot of talent, but I want to have more assists, I want to make sure when my team is in difficulties they can count on me."

After missing out on Lukaku, Conte settled for Morata as an expensive consolation prize.

But, like Lukaku, the 25-year-old Spaniard has failed to score in his last six games, earning criticism for some lethargic displays.

Morata also had to claim he had been misquoted after an interview in which he appeared to hint he wouldn't stay with Chelsea for long because he doesn't enjoy London's hectic lifestyle.

In the circumstances, Morata and Lukaku could do with silencing the critics by producing a priceless winner at the Bridge.

Both players carried hefty price tags because of the belief they were ready to deliver when the stakes are highest.

That will be the case in west London this weekend as champions Chelsea try to claw their way back into the title race.

Conte's side crashed to a 3-0 defeat at Roma in the Champions League on Tuesday, erasing the momentum from successive league wins over Watford and Bournemouth.

United are five points behind City after winning only one of their last three league games, although they made it three successive wins in all competitions by beating Benfica in midweek.

Mourinho will be hoping for better luck on his latest return to Chelsea -- the club where he won three English titles and was sacked twice -- after United lost both their visits last season.

Abused by Chelsea fans during United's 4-0 and 1-0 defeats, Mourinho insists he doesn't attach special significance to the fixture.

"It isn't a big thing. It's normal, it's football. One day you are in one club, the next day you're in another club," he said.

Conte, who will give N'Golo Kante a late fitness test on his hamstring injury, admits Chelsea no longer have any margin for error if they are to overhaul United and City.

"Now there is a big problem for all the teams that want to fight for the title and this big problem is Manchester City," Conte said.

"If they continue in this way it will be very difficult to fight for the title."

Comments
Topics mentioned in this article
Chelsea Manchester United Álvaro Morata Romelu Lukaku English Premier League Football
Get the latest updates on ICC T20 Worldcup 2022 and CWG 2022 check out the Schedule, Live Score and Medals Tally. Like us on Facebook or follow us on Twitter for more sports updates. You can also download the NDTV Cricket app for Android or iOS.