After a dismal title defence last season, Chelsea look revitalised under new manager Antonio Conte and the Italian was able to celebrate his third successive win after the most emphatic display of his brief reign 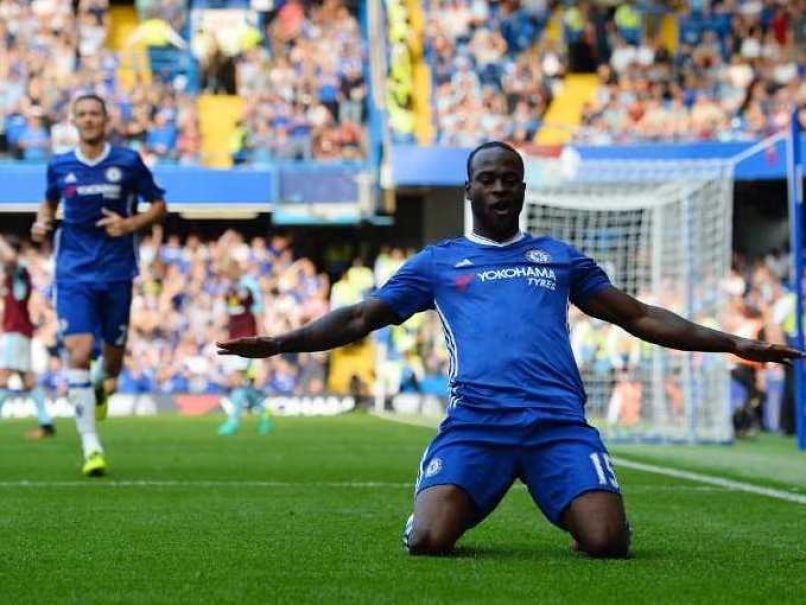 Victor Moses came off the bench to seal all three points for Antonio Conte's side.© AFP

Chelsea swept to the top of the Premier League with a 3-0 victory over Burnley, while Arsenal won 3-1 at Watford to ease the pressure on Arsene Wenger on Saturday.

After a dismal title defence last season, Chelsea look revitalised under new manager Antonio Conte and the Italian was able to celebrate his third successive win after the most emphatic display of his brief reign.

Second-placed Manchester United are behind Chelsea only on goals scored after Marcus Rashford struck deep into second-half stoppage time to snatch a 1-0 win at Hull City.

So disappointing last term, Eden Hazard has made a vibrant start to the new campaign and the Belgium midfielder put Chelsea ahead with a superb run and clinical finish from the edge of the penalty area in the ninth minute at Stamford Bridge.

Willian was back for Chelsea after recovering from a calf injury and the Brazil winger doubled their lead in the 41st minute before Nigeria's Victor Moses came off the bench to net the hosts' third in the 89th minute.

"It was a good performance. We have started very well this season but we must know we can improve," Conte said.

"Eden Hazard must be this decisive in every game and I'm pleased because I saw it today."

At Vicarage Road, Arsenal's first victory of the season, after losing to Liverpool and drawing with Leicester City, should silence Wenger's critics at least temporarily.

Failing to win their first two matches while struggling to make an impact in the transfer market had prompted some Arsenal fans to turn on Wenger again after many protested against him last season.

But there were no complaints as Arsenal took the lead in the ninth minute when Santi Cazorla stroked home a penalty after Nordin Amrabat elbowed Alexis Sanchez.

Mesut Ozil was making his first start of the season after being rested following Euro 2016 and Arsenal's German playmaker made up for lost time with a headed goal in first-half stoppage time.

Watford's Roberto Pereyra reduced the deficit in the 57th minute, but the Hornets remain winless.

"I believe we shot ourselves in the foot in the first game and were under huge pressure," Wenger said.

"Today we had a good solid performance but at the moment we are not completely there physically and you could see that in the second half."

At the KCOM Stadium, United secured their third successive win under Mourinho as teenage striker Rashford finally turned their pressure into a tangible reward.

Frustrated by a resolute Hull defence, United won it in the second minute of stoppage time when substitute Rashford bagged his first goal of the season with a tap in from Wayne Rooney's low cross.

Leicester finally secured the first win of their title defence with a 2-1 success against Swansea City at the King Power Stadium.

Claudio Ranieri's side took the lead in the 32nd minute when Jamie Vardy finished off a typically efficient counter-attack from the champions and captain Wes Morgan lashed in the second in the 52nd minute.

Riyad Mahrez wasted a chance to make it three when the winger's penalty was saved by Lukasz Fabianski and there was more frustration for Leicester when goalkeeper Kasper Schmeichel came off injured.

But Leroy Fer's 80th-minute goal for Swansea came too late to rescue a point for the visitors.

James Milner gave Liverpool a deserved lead with a penalty in the 43rd minute after Roberto Firmino went down under the slightest contact by Erik Lamela.

But a sustained spell of second-half pressure climaxed when the unmarked Rose drilled home to preserve Tottenham's unbeaten record.

Everton won 1-0 against Stoke City at Goodison Park after Leighton Baines' penalty was pushed onto a post by Shay Given, only for the ball to rebound off the goalkeeper's head into the net for an own goal.