Chelsea rested the likes of Eden Hazard and Cesc Fabregas for the Premier League match against Stoke City. 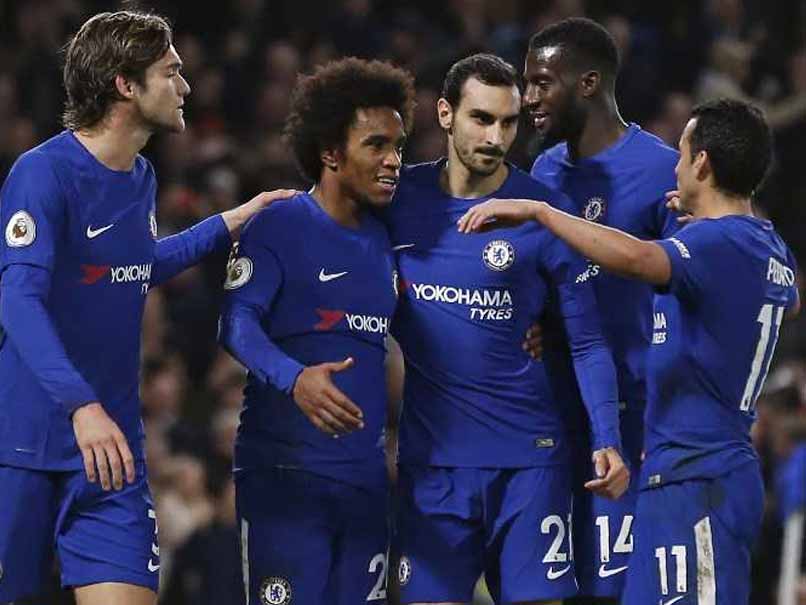 Chelsea players celebrate after Willian scored the fourth goal of the match vs Stoke City.© AFP

Chelsea demonstrated the yawning chasm in squad depth that exists in the Premier League with a 5-0 canter past Stoke City at Stamford Bridge on Saturday. While both sides rotated their squads after a hectic series of fixtures, Chelsea maintained their quality on the pitch in a scintillating opening half-hour, racing into a 3-0 lead and effectively winning the match through goals from Antonio Rudiger, Danny Drinkwater and Pedro. A late Willian penalty and a fine individual effort from Davide Zappacosta completed the scoring in a game that had long since ceased to be a contest.

It took just two minutes and 35 seconds for Stoke's makeshift side to be exposed. Willian sent over a long, looping free-kick to the far post where Rudiger rose to head powerfully home.

It was 2-0 after eight minutes.

This time Stoke did manage to clear a set piece, a corner on this occasion, only to see the ball drop to Drinkwater just outside the area.

A touch to control and a swish of his right boot later and the ball was flying into the top corner, leaving Stoke goalkeeper Jack Butland helpless.

A third goal seemed inevitable and it arrived after 23 minutes.

Willian slipped the ball to Pedro who allowed it to drift across his body, wrongfooting Tymon in the process, before striking it low into the corner of Butland's net.

At this point, it appeared that the record Premier League victory -- Manchester United's 9-0 win over Ipswich in 1995 -- could possibly be eclipsed.

This gave Charlie Adam more time in midfield. The Scot used it wisely, floating a delightful ball into the path of Mame Biram Diouf, who used his upper arm to control it before he slotted his shot under the body of Thibaut Courtois. The goal was rightly disallowed.

Stoke then fashioned another opportunity in the opening minutes of the second half.

However, Saido Berahino's understandable lack of confidence having not scored since February 2016 saw him shoot tamely at Courtois.

Two minutes later, Chelsea had their fourth goal. Willian, who was clearly bundled over by Geoff Cameron in the area, sent Butland the wrong way with his penalty.

With the game nearing its conclusion, Zappacosta chose the moment to score his first Premier League goal, collecting the ball on the right, cutting inside and driving a low shot past Butland.

Comments
Topics mentioned in this article
Chelsea Stoke City Willian English Premier League Football
Get the latest updates on ICC T20 Worldcup 2022 and CWG 2022 check out the Schedule, Live Score and Medals Tally. Like us on Facebook or follow us on Twitter for more sports updates. You can also download the NDTV Cricket app for Android or iOS.