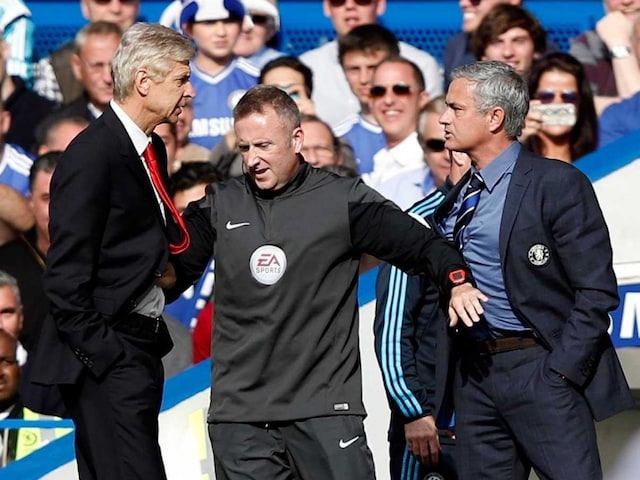 Jose Mourinho has vowed to silence the critics when Manchester United face champions Leicester, while his old rival Arsene Wenger hopes to celebrate a memorable milestone with a rare success against Chelsea on Saturday.

Mourinho finds himself under fire less than two months into his United reign after three successive defeats and an unconvincing League Cup win at third tier Northampton.

United are already trailing six points behind Premier League leaders Manchester City and another setback at Old Trafford this weekend would be a huge blow to Mourinho's bid to stamp his authority on an team that has underachieved in recent years.

After winning their first three league matches under Mourinho, as well as beating Leicester in the Community Shield, United lost to City and Watford, either side of a Europa League defeat at Feyenoord.

Mourinho's tactics and team selections have been called into question, while there have been suggestions the manager's public criticism of individual players, including injury-plagued defender Luke Shaw, has not gone down well in the dressing room.

Seeing off minnows Northampton did little to quell the rising tide of discontent but, in typically bullish fashion, Mourinho has come out fighting.

"We had a bad week. I know the world is full of Einsteins. I know they tried to delete 16 years of my career," Mourinho moaned.

"They tried to delete an unbelievable history of Manchester United and to focus on a bad week with three bad results. But that's the new football, it's full of Einsteins."

That Mourinho is at a low ebb on the same weekend that Wenger celebrates his 20th anniversary as Arsenal manager won't have been lost on the Frenchman.

Wenger, who has endured many barbs from Mourinho in the past, faces Chelsea looking to improve on a woeful record of five wins in his last 31 meetings against the Blues.

His last major milestone -- his 1,000th match as Arsenal manager -- was spoilt by a 6-0 thrashing at Stamford Bridge.

But having seen a second-string team win 4-0 at Nottingham Forest in the League Cup in midweek, following a 4-1 success at Hull last weekend, Wenger is confident the depth of his squad will help restore order after a sluggish start to the season.

"We have four days to prepare for the (Chelsea) game, let's focus on that now," Wenger said.

"The performance shows that the players who played at Hull need to be on their toes and that's what we want -- competition for places."

Chelsea go into the London derby buoyed by a 4-2 League Cup win at Leicester in which they came from 2-0 down.

One player desperate to feature at the Emirates is Cesc Fabregas, who made his name as a player under Wenger at Arsenal.

The Spain midfielder is yet to start in the league this season, but having scored twice in extra time at Leicester, he is hopeful of forcing his way into Antonio Conte's line-up at the Emirates.

"It's a new situation for me in my career after 13 years of basically playing all the time for my club and national team," Fabregas said.

"And it's been tough, I'm not going to deny it. But the last thing I will do is complain or put my hands up and give in."

Table-topping City head to Swansea for the second time this week after winning 2-1 at the Liberty Stadium in the League Cup.

City have won all nine matches under boss Pepe Guardiola, including five in the league, and the Spaniard kept his team in south Wales to aid their recovery time during a busy period.

Even so, changes are certain as Sergio Aguero is back from suspension and captain Vincent Kompany is struggling with an injury suffered in midweek.

"I want us to recover well, and train well, prepare as well as possible for our game in Swansea, for our game in the Champions League and for Tottenham away," Guardiola said.

Comments
Topics mentioned in this article
Chelsea Arsenal English Premier League Football
Get the latest Cricket news, check out the India cricket schedule, Cricket live score . Like us on Facebook or follow us on Twitter for more sports updates. You can also download the NDTV Cricket app for Android or iOS.