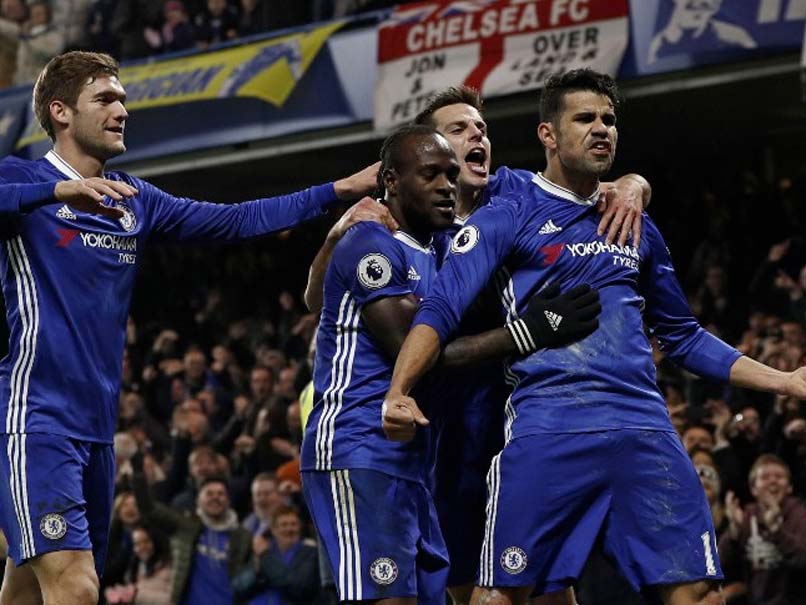 Chelsea now have an eight-point lead at the top of the Premier League standings.© AFP

Diego Costa marked his comeback with a goal as Chelsea overcame an obdurate Hull City side 2-0 on Sunday to surge eight points clear at the Premier League summit. Costa missed Chelsea's 3-0 win at Leicester City last weekend due to a back problem, amid reports he had rowed with a fitness coach after being unsettled by a big-money offer from China. But after returning to the starting XI, his 15th goal of the campaign set Antonio Conte's side en route to an eighth straight home league win, rubber-stamped by Gary Cahill's late header.

Asked about Costa's display by the BBC, Conte said: "I am happy for him and to finish this speculation (about his future). He played and played very well.

"We are in the second part of the season. Every game is now very tough for us and also for the other teams."

With Tottenham Hotspur, Liverpool, Manchester City and Manchester United all dropping points and Costa back in the fold, Chelsea's fans were left to reflect on something approaching a perfect weekend.

The Costa furore, and a recent 2-0 defeat at Tottenham, had threatened to rob Chelsea of their momentum, but they will go into back-to-back games against Liverpool and Arsenal with belief restored.

Marco Silva's Hull remain in the relegation zone, their disappointment compounded by injuries to Ryan Mason and Curtis Davies, the former being taken to hospital after an aerial collision with Cahill.

"Chelsea had more ball possession, but our team tried and conceded in the last minute of the first half, which was cheap," Silva told Sky Sports.

"It was a good performance, but I want more."

Costa replaced Willian in the only change to the Chelsea team that won at Leicester and he almost found the net inside 11 seconds, chesting down a headed clearance and volleying just wide.

The game's early rhythm evaporated following a nasty clash of heads between Cahill and Mason, who had to be stretchered off after receiving treatment on the pitch for around eight minutes.

Tom Huddlestone had dragged a shot across goal and wide prior to the stoppage and Hull continued to look for inroads after it.

Harry Maguire ambled forward from centre-back and saw a shot deflected into the side-netting and from Evandro's corner, the Hull number five's header had to be fielded by goalkeeper Thibaut Courtois.

But while Hull continued to threaten sporadically, Maguire working Courtois again with a thumping drive from 25 yards, as the first half wore on the home side began to tighten the screw.

Marcos Alonso had a deflected effort palmed over by Eldin Jakupovic, while Pedro Rodriguez might have had a penalty after Hull debutant Omar Elabdellaoui blundered into him from behind.

The nine minutes of added time yielded by Mason's injury produced the breakthrough.

Chelsea were aggrieved that Davies avoided a second yellow card for lunging in on Pedro, but they were celebrating shortly after.

Alonso's crossfield pass found Victor Moses on the right and he shifted the ball outside Andy Robertson before cutting the ball back for Costa to sweep home.

The penalty grievances were levelled up four minutes into the second half when Alonso escaped sanction despite clattering Abel Hernandez on the back of the foot as they competed for possession.

Costa twice threatened to double Chelsea's lead, but even with Davies forced off by an apparent hamstring problem, Hull continued to poke and probe, drawing groans from the home fans.

After seeing Courtois make another save, albeit to repel an off-target Michael Dawson effort, Conte made a double change, sending on Willian and Cesc Fabregas for Hazard and Pedro.

Fabregas made an instant impact, with his left-wing free-kick headed in by Cahill in the 81st minute for Chelsea's second goal.

Costa was denied a second by Jakupovic's legs, but when he departed two minutes later, to be replaced by Michy Batshuayi, cries of "Diego!" echoed around Stamford Bridge.

Comments
Topics mentioned in this article
Football Chelsea Hull City Tigers Diego Costa Gary Cahill English Premier League
Get the latest updates on IPL Auction 2023 and check out  IPL 2023 and Live Cricket Score. Like us on Facebook or follow us on Twitter for more sports updates. You can also download the NDTV Cricket app for Android or iOS.