Liverpool manager Brendan Rodgers revealed on Thursday that he hopes to seal two more signings in the next 48 hours. 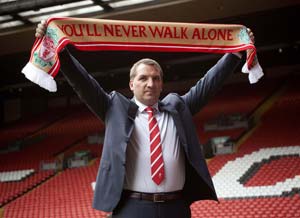 Liverpool manager Brendan Rodgers revealed on Thursday that he hopes to seal two more signings in the next 48 hours.

The Northern Irishman has been linked with loan deals for Barcelona winger Cristian Tello, 21, and Real Madrid midfielder Nuri Sahin, 23, and he confirmed he expects news on two deals very soon.

"I am hopeful we can bring in one or two more to help the group here," Rodgers said on Thursday.

"I'll find out later. We hope in the next couple of days we'll have one or two coming in. Hopefully in the next 48 hours we will find out."

However, the former Swansea boss has been told he has to work to a limited budget because Liverpool's US owners are unwilling to splash out huge sums to solve the problem.

He has already had to sell Dirk Kuyt, Alberto Aquilani and Maxi Rodriguez to raise funds for the Borini and Allen deals.

"There has been a lot of great work going on behind the scenes enquiring about players but the reality is we didn't have the money this year," Rodgers said.

"That is something which doesn't worry or frustrate me, it is the real world we are in here.

"It just means we have to be effective with the players we have. Everyone wants the money but you can't always have the money."

The Reds boss does not believe that burly hitman Carroll, a target for West Ham and Newcastle, is a good fit for the smooth passing style he wants Liverpool to play.

"Naturally his height and his power gives him that strength but if you play a different style it is that much more difficult," Rodgers said.

"There is no doubt he is happy to be here. But every player wants to play and there are not many players you can promise will play. We will see what develops."

One player unlikely to leave Anfield is Daniel Agger. The Denmark defender has been the subject of two bids from Manchester City but Rodgers said: "He is a top player and I want to keep him here.

"He made clear in the first conversation we had that he wanted to be part of our revolution here and he hasn't wavered from that.

"Other reported clubs have made bids for him, which is natural, because he is a top player.

"But for us nothing has changed: he doesn't want to go and we don't want to sell him."