Arsenal came back from a goal down to beat Stoke City 3-1, with Mesut Ozil playing a key role in the Gunners' victory 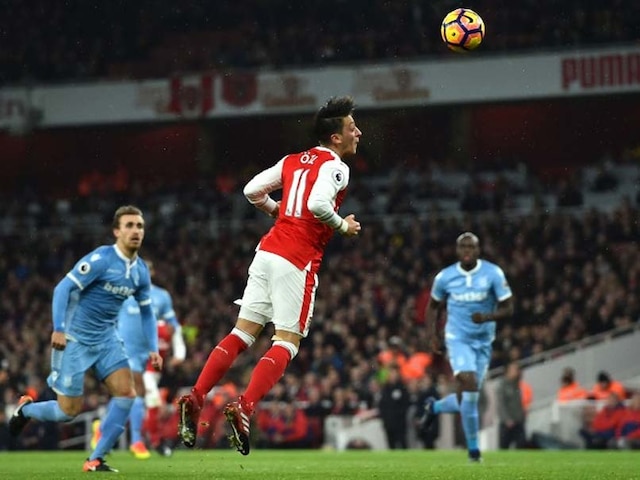 Mesut Ozil's crafty header inspired Arsenal to a 3-1 comeback victory over Stoke City on Saturday as Arsene Wenger's side supplanted Chelsea at the Premier League summit.

Charlie Adam's penalty put Stoke ahead at the Emirates Stadium, but Theo Walcott equalised before Alex Oxlade-Chamberlain teed up Ozil to float a header over Lee Grant in the 49th minute.

Alex Iwobi completed victory to lift Arsenal top on goal difference above Chelsea, who go in search of a ninth consecutive win against West Bromwich Albion on Sunday.

Arsenal went into their meeting with Stoke on the back of one-sided wins over West Ham and Basel, but the first half hour of the match suggested their luck might be about to turn.

First, Shkodran Mustafi was forced off by injury, which saw Hector Bellerin make an earlier than expected return from an ankle problem as a substitute.

Then, in the 29th minute, Adam celebrated his 31st birthday by giving Stoke the lead from the spot after Granit Xhaka had caught Joe Allen with his elbow.

The decision drew a furious reaction from Arsenal manager Wenger, who appeared to push the fourth official.

But Arsenal levelled in the 42nd minute when Walcott neatly converted Bellerin's cross at the near post for his 10th goal of the season before Ozil put the home side in front.

Italian striker Stefano Okaka scored his first Watford goals as Walter Mazzarri's side came from behind to beat Everton 3-2, leaving Ronald Koeman's men with one win from their last 10 league games.

Swansea City climbed off the foot of the table at Sunderland's expense with a 3-0 home win over David Moyes's side in which Spain international Fernando Llorente scored twice.

Gylfi Sigurdsson broke the deadlock with a 51st-minute penalty, awarded for handball against Jason Denayer.

Sigurdsson's corner set up Llorente to add a second and the former Athletic Bilbao striker made the game safe from Jefferson Montero's cross to propel Bob Bradley's men clear of the bottom three.

Robert Snodgrass's 27th-minute penalty put Hull ahead, but Zaha won a spot-kick that Christian Benteke converted before dancing past Tom Huddlestone and Sam Clucas and slamming home to give Palace the lead.

Adama Diomande equalised and Jake Livermore gave Hull an 78th-minute advantage, only for Zaha to tee up Fraizer Campbell for a headed 89th-minute equaliser.

Jeff Hendrick's brilliant 13th-minute volley set Burnley on the path to a 3-2 home win over Bournemouth.

The Irishman netted from 25 yards and further goals from Stephen Ward and George Boyd secured victory despite Benik Afobe and Charlie Daniels netting for the visitors.

Comments
Topics mentioned in this article
Football Arsenal Stoke City Watford Everton Mesut Özil English Premier League
Get the latest Cricket news, check out the India cricket schedule, Cricket live score . Like us on Facebook or follow us on Twitter for more sports updates. You can also download the NDTV Cricket app for Android or iOS.