Premier League: Song could be next to leave, admits Wenger

Arsene Wenger admitted on Friday that Cameroon midfielder Alex Song could be the next Arsenal star to leave the Emirates Stadium after Robin van Persie's exit. 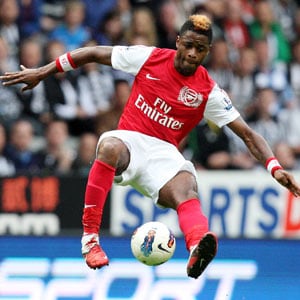 Arsene Wenger admitted on Friday that Cameroon midfielder Alex Song could be the next Arsenal star to leave the Emirates Stadium after Robin van Persie's exit.

Van Persie is set to complete his transfer to Manchester United later on Friday but the big-name departures might not end there as Song is a £15 million ($23 million, 19 million euro) target for Barcelona.

Asked if it was possible the 24-year-old could leave and if other players would arrive to replace Song and van Persie, Arsenal manager Wenger said: "Both can happen.

"This decision (on Song) is not made. No (bid has been made). I cannot tell you more."

Wenger was desperate to hang onto van Persie after the Dutch forward scored 37 goals in all competitions last season and he has admitted his sale was a "bitter pill" to swallow.

But the Frenchman is rather more relaxed about the prospect of losing Song, who emerged a key figure in the central midfield holding role last season.

Wenger believes he already has enough quality in midfield to cope without Song and, speaking at his press conference ahead of Saturday's Premier League opener against Sunderland, he said: "Midfield is a different area because we have nine or 10 midfielders of top-class quality.

"Just today we have six or seven midfielders available, plus (Jack) Wilshere and (Emmanuel) Frimpong who are coming back.

While Wenger is frustrated to have lost van Persie just 12 months after Cesc Fabregas and Samir Nasri engineered moves to Barcelona and Manchester City, he knows he had no choice but to sell as the striker had only one year left on his contract.

It was unthinkable to lose the £24 million transfer fee that United have agreed to pay for van Persie, even if it meant strengthening one of Arsenal's main rivals for silverware.

Wenger believes the recent additions of strikers Olivier Giroud and Lukas Podolski plus Spain midfielder Santi Cazorla should ensure the Gunners remain a force to be reckoned with.

"We regret that we have lost a great player and for one simple reason -- he only had one year left on his contract. He wanted to go," Wenger said.

"We anticipated this situation might happen, therefore we bought Podolski and Giroud.

"I think we were prepared to keep him of course. Selling to a rival was not what we wanted but there was not much choice.

"We had only one club really interested at the level we thought would be acceptable and that was Manchester United.

"At the end of the day, that was the only decision we could make."

Comments
Topics mentioned in this article
Football Manchester City Alex Ferguson Mark Hughes Liverpool Arsenal English Premier League
Get the latest updates on ICC T20 Worldcup 2022 and CWG 2022 check out the Schedule, Live Score and Medals Tally. Like us on Facebook or follow us on Twitter for more sports updates. You can also download the NDTV Cricket app for Android or iOS.