Looking to bounce back from the trauma of letting a 3-0 lead slip in their 3-3 draw at Sevilla in the Champions League, Liverpool went ahead in the 65th minute through former Chelsea man Mohamed Salah. 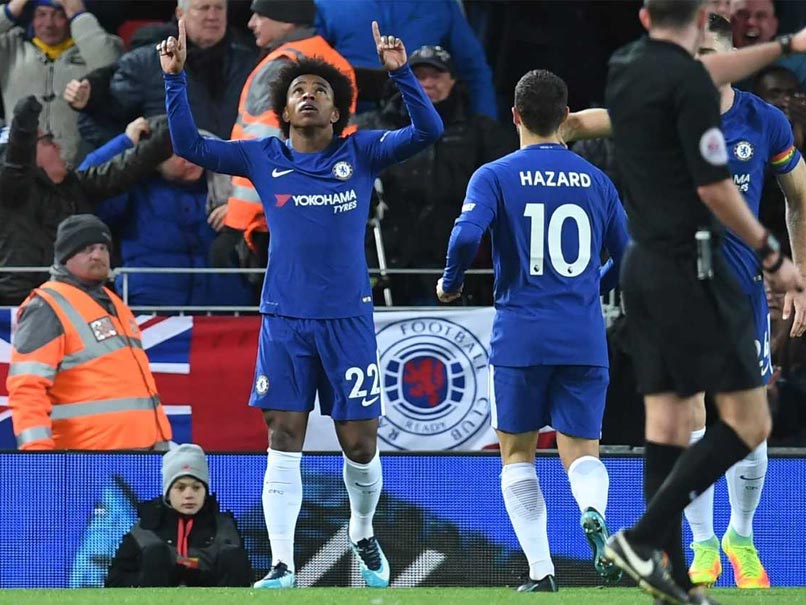 A fluke 85th-minute goal by substitute Willian denied Liverpool a morale-boosting Premier League victory as Chelsea rescued a 1-1 draw at a chilly Anfield on Saturday.

Looking to bounce back from the trauma of letting a 3-0 lead slip in their 3-3 draw at Sevilla in the Champions League, Liverpool went ahead in the 65th minute through former Chelsea man Mohamed Salah.

But with Jurgen Klopp's side heading for their first win over a major rival of the campaign, Willian lobbed Simon Mignolet with an overhit cross to earn Antonio Conte's champions a share of the points.

Willian's goal was only the second Liverpool had conceded at Anfield in the league this season and stemmed a run of three successive league wins for the home side.

Chelsea were left three points below second-place Manchester United and could now find themselves 11 points behind Manchester City if the leaders win at Huddersfield Town on Sunday.

The team sheets were almost as notable for who was on the bench as for who was in the two starting XIs, with Sadio Mane, Roberto Firmino, Cesc Fabregas, Pedro and Willian all kicking their heels in the dug-outs.

Klopp used his programme notes to urge his side not to forget how well they had played in the first half against Sevilla, but for all their early possession here, it was Chelsea who possessed the keener edge.

Eden Hazard, playing off the recalled Alvaro Morata, was central to everything the visitors did, repeatedly dropping deep to baffle Liverpool's midfielders with devastating feints and turns.

He was the first player to threaten, gathering a pass from Danny Drinkwater and cutting in from the left before dispatching a low shot that Belgium team-mate Mignolet had to turn behind.

It was Hazard's through-ball that obliged Mignolet to slide out and save at Drinkwater's feet and it was from Hazard's lay-off that Davide Zappacosta warmed the Liverpool goalkeeper's palms from 20 yards.

The ensuing corner -- taken by Hazard -- produced a goal-mouth scramble in which both Morata and Gary Cahill threatened, while Marcos Alonso curled a trademark free-kick narrowly wide.

Not until the 41st minute did Liverpool -- for whom Daniel Sturridge started up front -- muster a shot of note, Salah whipping an effort fractionally wide from the right.

Hazard was involved in penalty shouts either side of half-time, first escaping punishment for a nudge on Philippe Coutinho and then seeing his own appeals dismissed after tripping over James Milner's foot.

Klopp moved Salah into a more central position in the second half and it served to enliven the hosts, Thibaut Courtois almost turning Sturridge's cross into his own net and saving from Jordan Henderson.

As the game opened up, Chelsea also threatened -- Zappacosta zipping the ball across the face of goal and Morata turning Drinkwater's cross wide at the near post -- but it was Liverpool who went ahead.

Tiemoue Bakayoko failed to cut out Coutinho's pass and Alex Oxlade-Chamberlain's prodded pass freed Salah to tuck his 10th goal of the league campaign -- and 15th of the season -- past Courtois.

Salah, who is the league's top scorer, did not celebrate his goal in what may have been a tribute to the over 300 victims of Friday's bomb and gun attack in his native Egypt.

He was prevented from being the match-winner when Willian drifted across the Liverpool box from left to right before hitting an overhit cross that floated over Mignolet and beneath the crossbar.

Salah came close to restoring Liverpool's lead in stoppage time, but his snapshot was pushed aside by Courtois.

Comments
Topics mentioned in this article
Chelsea Liverpool Football Willian English Premier League
Get the latest updates on India vs Australia Series, check out the India vs Australia Schedule for 2020-21 and Ind vs Aus live score . Like us on Facebook or follow us on Twitter for more sports updates. You can also download the NDTV Cricket app for Android or iOS.