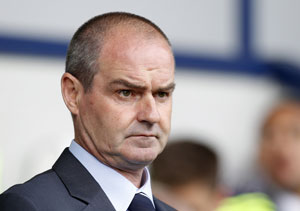 West Bromwich Albion full-back Steven Reid said on Sunday that the club's players had been left in "complete shock" by the abrupt dismissal of head coach Steve Clarke.

Clarke was sacked late on Saturday, following a run of four consecutive defeats that left the Midlands club two points above the Premier League relegation zone.

The 50-year-old Scot led West Brom to an eighth-place finish last season -- their highest in the Premier League era -- and Reid says that the players had no inkling that he was about to be shown the door.

"There is a shock. Sometimes in a dressing room you get a sense a change is coming, but this has come as a complete shock," he told BBC television programme Match of the Day Extra.

"In recent weeks we can only put the results down to a drop in confidence. In the Premier League, when you go on a run of three or four games without a victory it can affect the confidence of the lads and then you are looking at ways you can get back on track."

West Brom are yet to appoint a successor to Clarke, with assistant coach Keith Downing due to take control of first-team affairs on a temporary basis.

Reid backed the West Brom board to pick the right man to succeed Clarke.

"You've got to leave that decision to the board," he said.

"The last three appointments have gone really well -- Roberto Di Matteo got us promotion, Roy Hodgson got us mid-table security and Steve Clarke took us to our highest Premier League position last season."

Comments
Topics mentioned in this article
Football West Bromwich Albion Manchester City Mark Hughes Steven James Reid Alex Ferguson English Premier League
Get the latest updates on India vs Australia and check out  Schedule, Results and Live Score. Like us on Facebook or follow us on Twitter for more sports updates. You can also download the NDTV Cricket app for Android or iOS.