Faced with the prospect of losing his place, Reina reluctantly agreed to be reunited with former Liverpool Rafael Benitez, who is now in charge at Napoli. 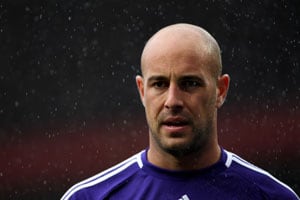 Spanish goalkeeper Jose Reina on Monday launched a scathing attack on Liverpool after accusing the club of forcing him to join Napoli on loan.

The 30-year-old started his season-long loan to the Italian side on Monday following several months of speculation over his future.

He was reported to be a target for Barcelona at the end of last season but a deal with the Spanish champions never materialised.

Faced with the prospect of losing his place, Reina reluctantly agreed to be reunited with former Liverpool Rafael Benitez, who is now in charge at Napoli.

But Reina, who joined Liverpool from Villarreal in 2005, said he was disappointed to have been left with little choice about his future.

"If I have one regret, it is the way that I am leaving," Reina wrote on his official website pepereina25.com.

"It is only natural that I would be disappointed that the Liverpool management agreed to loan me to Napoli without telling me first.

"I thought that I deserved better than that, even though I understand that difficult decisions have to be taken in football."

Reina conceded that he had told Liverpool he would have been keen to join Barca if a serious offer was made but was still surprised at the way he was treated.

"A lot has been made about me informing the club that if an offer came in from Barcelona that I would have liked them to consider it," Reina said.

"But I had also spoken to the club about the possibility of extending my contract if the offer was not made.

"I told the manager that I wanted to play for Liverpool and that Barcelona would only become an option for me if the opportunity arrived, like the rumours said it would, as it would be a chance for me to go back home.

"When it didn't come I was happy to fight for my place so I was surprised that Liverpool decided it was in the club's interests to send me to Napoli instead.

"Although it was not my decision to leave I will accept it just like I have always accepted any decision that Liverpool have taken for me."

Reina, who won the FA Cup and League Cup during his time at Anfield, is still contracted to Liverpool until 2016.

He made it clear that, while he is unhappy with the Liverpool hierarchy, he retains fond memories of his time on Merseyside.

"Liverpool is special in a way that only those who are lucky enough to experience the club close up can understand. It has given me memories that will live with me forever and friendships that will last just as long," he added.

"I may not have won as many trophies and medals as I would have liked since joining in 2005 but the experiences I have been a part of are as important as any silverware.

"None of this will change my feelings for the club or the people in any way and now I have to look forward to a new challenge with Rafa Benitez, who I consider to be the best manager I have worked with."