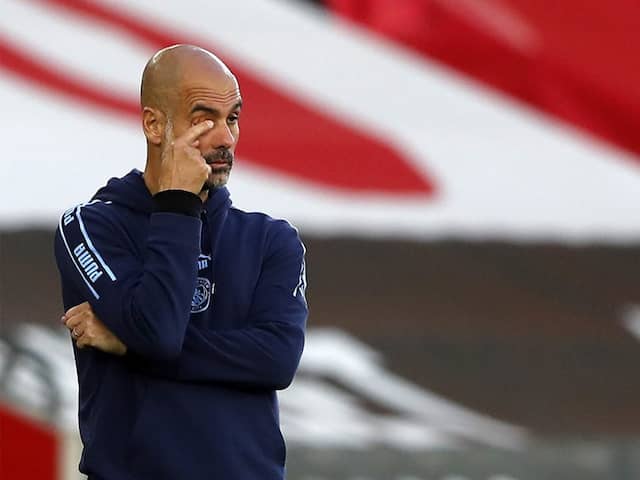 Pep Guardiola saod his side cannot lose games in the manner they did in going down 1-0 at Southampton.© AFP

Manchester City manager Pep Guardiola admitted his side cannot lose games in the manner they did in going down 1-0 at Southampton on Sunday if they are to take the Premier League title back from Liverpool next season. Manchester City lost for the ninth time in the league this season as Che Adams's spectacular first Southampton goal condemned Guardiola's men to defeat despite enjoying 74 per cent possession and 26 shots at goal. "We played really well, but it was a little bit the resume of this season. We make one mistake, they punish us," said Guardiola.

"We need to improve because it happened many times this season."

Just four days ago City showed what they are capable of when at their best by thrashing newly-crowned champions Liverpool 4-0.

But defeat on the south coast sees the Reds regain their 23-point lead at the top of the table.

Guardiola, though, insisted his plan to get back on top does not involve a summer spending spree on new players.

"No, I don't think so," added the Catalan when asked if new signings were the key to a change in fortunes.

"I think we played good. The desire, the character to play until the end was there, we put Southampton with 10 players in the penalty spot, so we did really well.

"When you review the games and the chances we created you cannot do more. I like the way we played but it is not enough."

Adams has endured a nightmare run in front of goal since a 15 million pounds (USD 18.7 million) move from Birmingham a year ago.

But on his 30th appearance for Southampton, he caught City goalkeeper Ederson stranded well outside his area from fully 40 yards out.

Guardiola had made six changes from the rout over Liverpool with Kevin De Bruyne among those dropping to the bench.

Even without the brilliant Belgian, City still created enough chances to win comfortably but were only denied by some inspired goalkeeping by Alex McCarthy and wayward finishing.

Gabriel Jesus has failed to take his chance in the absence of the injured Sergio Aguero in recent weeks and blazed over with the goal gaping from Joao Cancelo's cross before Fernandinho struck the post and McCarthy made the first of a string of saves from David Silva's powerful header.

City continued to dominate after the break as McCarthy spread himself brilliantly to save from David Silva before Bernardo Silva's goalbound effort was deflected wide.

De Bruyne and the in-form Phil Foden were introduced on the hour mark, but still the hosts' defence held firm to keep City scoreless for just the fourth time this season.

"When you want to take something against such an opponent you have to run more, sprint more, fight more, be brave and also have a little bit of luck," said Southampton coach Ralph Hasenhuttl.

Saints were marooned in the bottom three when the sides last met in a 2-1 City win in November, a week after they suffered a Premier League record 9-0 home defeat to Leicester.

But the Southampton board's backing of Hasenhuttl, who recently signed a contract extension to 2024, has been fully justified as the Austrian's side climb to 13th and could yet be the beneficiaries of City's misfortune.

Southampton are just five points off eighth place which may be enough for a place in next season's Europa League should City's appeal against a two-season ban from European competition not be successful later this month.

Southampton English Premier League Pep Guardiola Football
Get the latest Cricket news, check out the India cricket schedule, Cricket live score . Like us on Facebook or follow us on Twitter for more sports updates. You can also download the NDTV Cricket app for Android or iOS.