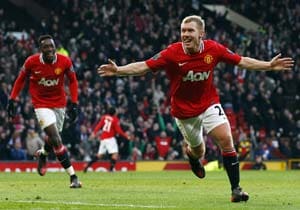 Scholes and Beckham, both 38, came through the youth ranks at United together in the early 1990s and enjoyed huge success as midfield partners before Beckham left for Real Madrid in 2003.

Following subsequent spells with Los Angeles Galaxy, AC Milan and, latterly, Paris Saint-Germain, Beckham has announced that he is to retire at the end of the campaign.

Scholes remained at United, but he, too, will bow out of the game at the end of the season, having announced his retirement last week.

With United's long-serving manager Alex Ferguson also set to step down after his side's final league game of the season at West Bromwich Albion on Sunday, it means a glorious era at the Old Trafford club is coming to an end.

"It's a sad day, but hopefully David is happy with what he's done," Scholes told British newspaper The Daily Mail.

"From the start, you knew the quality he had and the professionalism. His range of passing and his free-kicks were brilliant and that was no accident -- he was out there practising all day long.

"That's our year finished now. I think there's only Ryan Giggs, who was a year older than us, still going as strong as ever."

Comments
Topics mentioned in this article
Football Arsenal Chelsea Manchester City Manchester United Mark Hughes Wayne Rooney Alex Ferguson English Premier League
Get the latest updates on India vs Australia and check out  Schedule, Results and Live Score. Like us on Facebook or follow us on Twitter for more sports updates. You can also download the NDTV Cricket app for Android or iOS.