Arsenal striker Olivier Giroud has pleaded for time to prove he is a worthy successor to Robin van Persie but fellow new boy Santi Cazorla has urged Arsene Wenger to splash the cash. 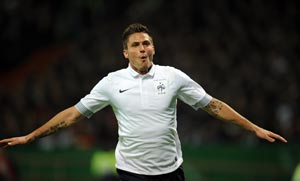 Arsenal striker Olivier Giroud has pleaded for time to prove he is a worthy successor to Robin van Persie but fellow new boy Santi Cazorla has urged Arsene Wenger to splash the cash.

Van Persie's £24-million ($37.6-million 30.5-million-euro) move to Manchester United and the subsequent sale of Cameroon midfielder Alex Song to Barcelona have prompted another bout of soul searching at the Emirates Stadium as Arsenal players and fans come to terms with their club's dispiriting start to the season.

In the circumstances, the last thing Wenger needed was to see his side held to a dour 0-0 draw by Sunderland on Saturday, especially as Giroud and Lukas Podolski -- the two strikers signed to replace van Persie -- gave underwhelming performances.

French forward Giroud, who came on as a second half substitute, was especially culpable as he squandered a golden opportunity to score a late winner.

Wenger acknowledged his side lacked a cutting edge in attack but Giroud scored 21 goals to help Montpellier win the Ligue 1 title last season and the 25-year-old is confident he can emulate that prolific form at Arsenal -- providing he is allowed to adjust to his new surroundings.

"This could have been the dream start but in Montpellier, I did not score for my first game, so I am not worried. Here, I will have plenty of chances and I will score," Giroud said.

"Last season was wonderful here for Robin but before that he took time to settle. I am just asking people to be a little patient with me.

"I am not here to make people forget Robin because he has made beautiful things here but I just want to bring something new.

"However, I am under no more pressure than that because if I think about that when I go onto the field, I will play with the handbrake on.

"I know Arsenal is a great club and needs a striker ready and efficient quickly. I need games to get confidence and it is up to me to succeed."

Cazorla made an impressive debut against Sunderland following his close-season move from Malaga but the Spanish midfielder was unable to spark a morale-boosting victory as Arsenal laboured without van Persie and Song.

With Podolski and Giroud showing signs of needing time to bed in, Cazorla believes Wenger needs to return to the transfer market to increase his options.

"It's clear van Persie is a great player and obviously we would all have preferred it if he had stayed. Song has gone as well and there are still 10 days left in the transfer market," Cazorla said.

"I don't know if we will sign anyone but obviously it's important to replace players like that because they were so important."

Comments
Topics mentioned in this article
Football Santi Cazorla Arsenal Manchester City Alex Ferguson Mark Hughes Olivier Giroud English Premier League
Get the latest updates on ICC T20 Worldcup 2022 and CWG 2022 check out the Schedule, Live Score and Medals Tally. Like us on Facebook or follow us on Twitter for more sports updates. You can also download the NDTV Cricket app for Android or iOS.