Leicester remain third but have won just one of their last seven league games, failing to score in three successive matches as their bid to qualify for the Champions League hits a rocky patch. 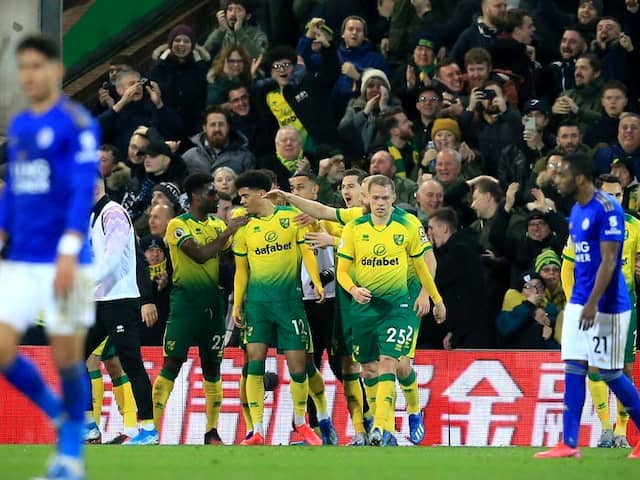 Brendan Rodgers admitted he was "bitterly disappointed" to see Kelechi Iheanacho's goal disallowed before Jamal Lewis fired bottom club Norwich to a 1-0 win over Leicester on Friday. Daniel Farke's side ended a four-game winless run as they took three points for just the second time in 15 league matches. Norwich were in danger of being cast adrift in the relegation battle but, aided by the VAR decision to chalk off Iheanacho's goal for handball, they have renewed hope of avoiding the drop thanks to Lewis's fine finish in the second half at Carrow Road.

Leicester remain third but have won just one of their last seven league games, failing to score in three successive matches as their bid to qualify for the Champions League hits a rocky patch.

Foxes boss Rodgers was furious with the VAR ruling and said: "We think it's very, very harsh.

"I'm not sure exactly what the ruling is, but obviously it hits their player's arms first. We're bitterly disappointed not to get it, because we were the better team in the game.

"I've watched a lot of games this week in the Champions League and Europa League and they seem to get to the decisions much quicker than they do in the Premier League."

Farke insisted handball was the correct call, saying: "I realised during the game it was more or less handball but the speed of the game makes it hard to judge so it is perfect for the VAR.

"I think it is quite normal it was disallowed. We are playing in the best league in the world against one of the best teams in the league. It is an amazing result."

In the midst of his worst drought for three years, there was bad news for Jamie Vardy as the Leicester striker missed the trip to Norfolk with a calf injury.

Iheanacho started up front in his absence, but Norwich threatened first when Ondrej Duda's cross found Ben Godfrey for a header that was too close to Leicester keeper Kasper Schmeichel.

Harvey Barnes opened up the Norwich defence with a nimble run and pass to Dennis Praet, but goalkeeper Tim Krul was equal to the midfielder's strike from the edge of the area.

Praet went closer in the 25th minute when he met Ricardo Pereira's cross with a near-post volley that bounced off the woodwork.

Iheanacho was guilty of a poor miss when he controlled Ayoze Perez's cross and blazed over from no more than six yards.

The Nigerian thought he had made amends for that howler four minutes into the second half when his curling shot beat Krul from the edge of the area.

But the ball had bounced onto Iheanacho's arm as he competed for possession with Godfrey and VAR intervened to rule it out.

Norwich responded with a thunderous 25-yard drive from Duda that Schmeichel tipped over at full stretch.

Schmeichel won another duel with Duda moments later, palming away a powerful effort when the midfielder should really have scored.

Farke's team were rewarded for their enterprising spell in the 70th minute when Max Aarons' cross reached Lewis wide on the left edge of the Leicester area and he drilled a superb strike past Schmeichel into the far corner.

The defender's first Premier League goal sparked wild celebrations, but Leicester should have been level seconds later when substitute Wilfred Ndidi headed over from close range.

Leicester City English Premier League Football
Get the latest Cricket news, check out the India cricket schedule, Cricket live score . Like us on Facebook or follow us on Twitter for more sports updates. You can also download the NDTV Cricket app for Android or iOS.