The club have have won only eight times at home this year compared to nine victories on the road. Dempsey expects the battle for the top four places to go right down to the end of the season and, despite their recent wobble, he is hopeful Spurs can hold their nerve. 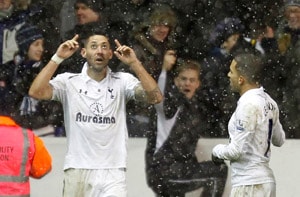 Tottenham midfielder Clint Dempsey fears his side's push for a place in the Champions League is in danger of being ruined by the nervous atmosphere at White Hart Lane.

Andre Villas-Boas's side suffered a setback in their bid to finish in the Premier League's top four after being held to a 2-2 draw against Everton on Sunday.

Spurs, who needed Gylfi Sigurdsson's 87th-minute goal to rescue a point, were seven points ahead of Arsenal last month but a slump in form has gifted the initiative back to third-placed Chelsea and fifth-placed Arsenal.

Chelsea are above fourth-placed Spurs on goal difference, while the Gunners would leapfrog their north London rivals with a win against Norwich on Saturday.

After narrowly missing out on Champions League qualification for the last two years, Dempsey is concerned that the anxiety of the Spurs fans is filtering through to the players at White Hart Lane.

The club have have won only eight times at home this year compared to nine victories on the road.

Asked about the tension, US international Dempsey said: "That's the way it's kind of been the last few games at home. It's been tense. I've felt like that's how the atmosphere has been.

"I don't know if it has been affecting performances. It's been noticeable, in the last three home games.

"It's a little bit more stressful but it's a good stress. At least we're pushing to try to get that spot. It's going to come to the end and, hopefully, we have enough character to get the job done."

Dempsey expects the battle for the top four places to go right down to the end of the season and, despite their recent wobble, he is hopeful Spurs can hold their nerve.

"You've got to keep going and do everything you can to help the team," he said.

"The race for a top-four finish will be a fight all the way until the end. We would have liked all three points against Everton but it was an important point."

Comments
Topics mentioned in this article
Football Manchester City Tottenham Hotspur Alex Ferguson Clint Dempsey Mark Hughes English Premier League
Get the latest Cricket news, check out the India cricket schedule, Cricket live score . Like us on Facebook or follow us on Twitter for more sports updates. You can also download the NDTV Cricket app for Android or iOS.