No Balotelli and no win for Manchester City at QPR

QPR, unbeaten in the league since the turn of the year, saw Anton Ferdinand join Turkish club Bursaspor on loan earlier Tuesday while Rob Hulse moved across London to Millwall. 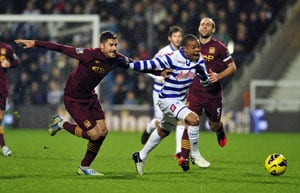 Balotelli was missing as he concluded the details of his move to AC Milan after City had accepted the Italian club's reported £19 million ($30 million) offer for the striker earlier in the day.

And without the controversial forward, Roberto Mancini's champions missed out on the chance to close the gap on leaders Manchester United to two points.

But the draw left QPR within four points of safety.

Balotelli's departure this month has been predicted for some time and the Italy international has been out of favour with Mancini, scoring just one league goal this season.

But the 22-year-old's unpredictable talents might just have made the difference in a stalemate at Loftus Road that will give west London club QPR hope they can avoid relegation.

City manager Mancini insisted, that for all the off-field controversy, he'd be sad to see Balotelli go.

"I hope Mario can continue to improve and can show he is ready because I think if he works hard, he can continue his growing and he can become one of the best players in Europe."

QPR, unbeaten in the league since the turn of the year, saw Anton Ferdinand join Turkish club Bursaspor on loan earlier Tuesday while Rob Hulse moved across London to Millwall.

However, Redknapp, would like to add to his squad, particularly after the weekend FA Cup humiliation at the hands of third division MK Dons when he labelled QPR's performance "disgusting".

Tuesday's first half would have done nothing to change Redknapp's view.

City were dominant from the start although, frustratingly from Mancini's point of view, they were unable to find the finish that would have put them in control of the game.

Rangers goalkeeper Julio Cesar twice punched unconvincingly but got away with it on both occasions, including when an early flap fell to Joleon Lescott who volleyed over from close range.

City were cutting through QPR's defence with ease, particularly down the Rangers right were Fabio da Silva was having a tough time against Samir Nasri and David Silva.

The pair combined in the 20th minute to create an opening for City right-back Pablo Zabaleta who had advanced into the box only to power his diving header against the bar with Cesar beaten.

Rangers had offered little but a 38th minute break by Adel Taarabt demonstrated his threat and England goalkeeper Joe Hart had to be at his very best to deny the Moroccan.

The action quickly shifted to the other end with Cesar matching Hart's effort from Gareth Barry's first-time shot.

Mancini attempted to inject fresh life into his side with the introduction of Edin Dzeko early in the second half for the ineffective Nasri but City's attacking moves lacked conviction.

And when they did get a clear sight of goal, Cesar showed he had overcome his earlier uncertainty, particularly when he smothered Silva's powerful low drive.

Rangers thought they should have had a 75th minute penalty when Loic Remy went tumbling under a challenge from Lescott but television replays suggested the forward had dived.