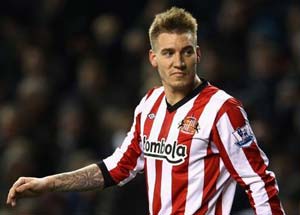 A statement on the club's website www.juventus.com said: "Nicklas Bendtner has completed a move to Juventus after the club agreed terms with Arsenal for the player's services.

"The 24-year-old Danish international joins on a season-long loan with the option to make the move permanent in the summer."

Bendtner's signing comes two days after a last-ditch but abortive attempt by Juventus to sign Manchester United striker Dimitar Berbatov, who had reportedly agreed terms with Fiorentina but did not show up.

The Dane arrived in Turin late on Thursday and after sailing through a medical check-up earlier on Friday has been given the chance to relaunch his career having spent the 2012 season on loan at Sunderland.

Juve said the 24-year-old striker will become "the ninth Danish player to wear the black and white stripes of Juventus", notably following in the footsteps of John Hansen, Carl Praest and Michael Laudrup.

Bendtner was signed by Arsenal in 2005 and made his debut in the League Cup against Sunderland the same year.

He spent a year on loan at Birmingham and then returned to the Gunners where he played regularly before being shipped to the north east coast last year.

Comments
Topics mentioned in this article
Football Manchester City Alex Ferguson Mark Hughes Napoli Juventus Stadium AC Milan Catania Chelsea Fiorentina Lazio Genoa Atalanta Chievo Juventus Arsenal Nicklas Bendtner English Premier League
Get the latest updates on India vs Australia Series, check out the India vs Australia Schedule for 2020-21 and Ind vs Aus live score . Like us on Facebook or follow us on Twitter for more sports updates. You can also download the NDTV Cricket app for Android or iOS.