Nicklas Bendtner on the verge of Juventus loan signing

Arsenal forward Nicklas Bendtner is on the verge of completing a loan move to Italian champions Juventus, it was reported on Thursday. 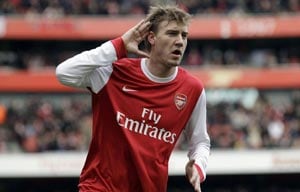 Arsenal forward Nicklas Bendtner is on the verge of completing a loan move to Italian champions Juventus, it was reported on Thursday.

ANSA news agency said the deal had yet to become official but that Juventus had "practically secured the services of Nicklas Bendtner".

It said: "The player will be loaned with the possibility of signing permanently for a fixed sum of 5million euros."

The report added that Bendtner was "expected in Turin later Thursday and could undergo a medical on Friday".

Berbatov had been expected in Italy, to sign for Fiorentina, on Wednesday after agreeing terms but did not show despite the Florence club paying for flights for the Bulgarian.

Fiorentina later hit out at Juventus for late interference in the deal, which has ultimately left Berbatov on the verge of signing for Fulham.

Comments
Topics mentioned in this article
Football Manchester City Alex Ferguson Mark Hughes Nicklas Bendtner Lazio Napoli Genoa Chelsea Atalanta Fiorentina Juventus Stadium AC Milan Catania Chievo Juventus Arsenal English Premier League
Get the latest updates on India vs Australia Series, check out the India vs Australia Schedule for 2020-21 and Ind vs Aus live score . Like us on Facebook or follow us on Twitter for more sports updates. You can also download the NDTV Cricket app for Android or iOS.