Sam Allardyce returned to haunt former club Newcastle United on Sunday by guiding West Ham United to a 1-0 win that took the London club into sixth place in the Premier League table. 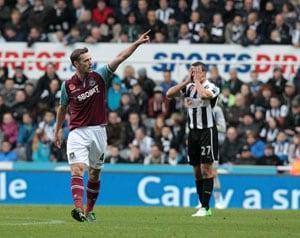 Sam Allardyce returned to haunt former club Newcastle United on Sunday by guiding West Ham United to a 1-0 win that took the London club into sixth place in the Premier League table.

On an afternoon of reunions in the north-east, former Newcastle captain Kevin Nolan claimed the only goal of the game eight minutes before half-time to give Allardyce's side only their second away win of the campaign.

Newcastle manager Alan Pardew, who was sacked by West Ham in 2006, saw Demba Ba go close with a header that was clawed off the line by visiting goalkeeper Jussi Jaaskelainen. The result left Newcastle in 10th place.

A dull first half at St James' Park sprung to life in the 37th minute when Nolan popped up to put the visitors in front.

Joey O'Brien's shot from outside the box was heading wide until Nolan poked out his foot to steer the ball into the net from six yards and break the deadlock.

Newcastle were quick to threaten at the other end, with Shane Ferguson drawing an impressive block from O'Brien and Hatem Ben Arfa seeing a shot hit the side netting after accumulating a couple of deflections en route.

Yohan Cabaye also had a sight of goal prior to the interval, after former Newcastle striker Andy Carroll fluffed his attempted clearance, but the France international could not find a way past Jaaskelainen.

Ba, who started despite concerns over a shin injury, thought he had equalised early in the second half but the officials ruled that Jaaskelainen had done enough to prevent his header from crossing the line.

The Finnish goalkeeper then had to turn a shot from Ba around the post, while Newcastle substitute Shola Ameobi headed just wide from a corner.

Carroll spurned a great opportunity to score against his old employers when he saw a side-footed effort saved by former team-mate Tim Krul after robbing Mike Williamson in the 72nd minute.

Krul went up for an injury-time corner but he could not get his head to Ben Arfa's delivery and Cabaye put a subsequent shot over the crossbar.