David Moyes brought on Wilfried Zaha -- the only United new face on the Asian Tour -- after 58 minutes to replace Shinji Kagawa, after the Japanese star fluffed a penalty kick but hit Manchester United's first goal against Cerezo. 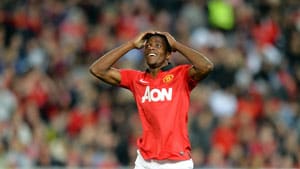 Manchester United new boy Wilfried Zaha scored his first ever goal for the English champions during their pre-season Asian tour, boosting his hopes for more time on the pitch.

"It felt great," Zaha said after the team chalked up the draw, following one win and two defeats on the tour.

"The goal has been coming for the last couple of games and I'm happy I finally managed to get it," he told Manchester United TV.

"It's all about the gaffer (manager David Moyes) really as he's given me chances to prove myself," said Ivory Coast-born Zaha, who signed with United in January but was on loan to Crystal Palace for the rest of the 2012-2013 season.

Moyes brought on Zaha -- the only United new face on the Asian Tour -- after 58 minutes to replace Kagawa, after the Japanese star fluffed a penalty kick but hit United's first goal against Cerezo.

"It's been great. Just playing time is all I wanted and hopefully I'll get that in the season to come," said Zaha, who made his senior England debut as an 87th-minute substitute in a friendly defeat to Sweden in November.

There were seven substitutions on a night of sweltering conditions in Osaka as the temperature hit 30 degrees Celsius (86 F), with 78 percent humidity. The referee stopped the game twice to let the players drink water.

As time ticked away with United on the brink of a humiliation, Zaha tapped home a cross from Brazilian midfielder Anderson after Belgian Adnan Januzaj had opened up Cerezo's defence.

Moyes, a former Everton manager who took over the United helm after Alex Ferguson retired at the end of last season, said Zaha had impressed him.

"He's had an impact in the games. We just want to try and bring him along nicely," the manager told a post-match news conference.

"At Manchester United we want all players to score goals and he's come up with an important goal in the last minute."

United were to arrive in Hong Kong Saturday for a friendly against Kitchee FC on Monday.

They will wind up their pre-season campaign with a friendly against Swedish outfit AIK Fotboll in Stockholm on August 6.