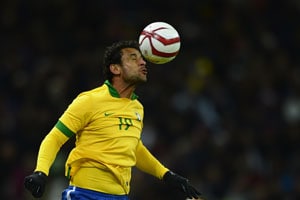 His prolific form for both club and country has also caught the eye of Turkey's Fenerbahce.

"We don't know what will happen in the future but right now I don't see myself leaving Fluminense," Fred told Radio Brasil.

"I have a long contract with Fluminense and my intention is to see it out."

It is understood the former Lyon forward doesn't want to move to a club where he is not guaranteed a regular first-team place so close to the World Cup.