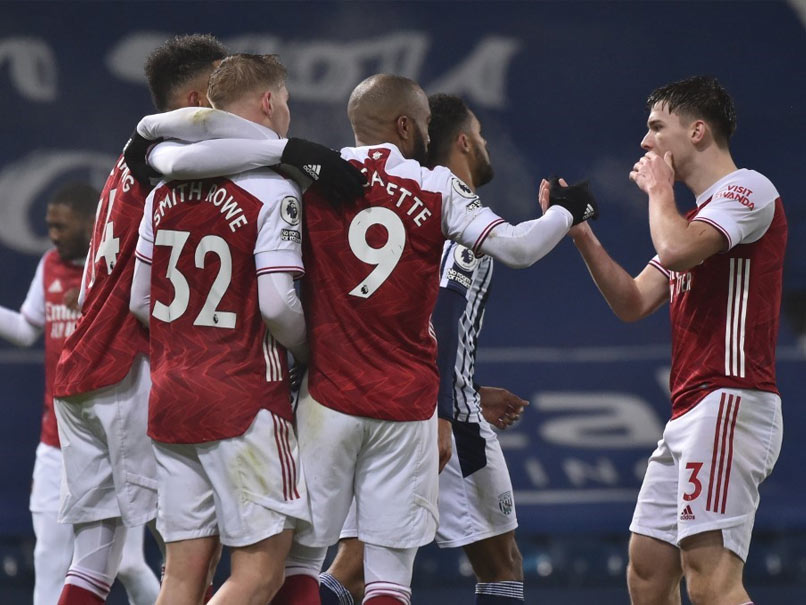 The win over West Brom helped Arsenal climb to 11th and within three points of the top six.© AFP

Mikel Arteta said the prospects for Arsenal's season are "completely different" after thrashing West Brom 4-0 to complete three Premier League wins in eight days. Prior to last weekend, the Gunners had gone eight league games without a win to find themselves battling at the bottom end of the table. But nine points from nine has propelled Arsenal back into contention for the European places as they climb to 11th and within three points of the top six. "I'm so happy we were able to achieve the target that we had because the table looks completely different," said Arteta, who had found his job under threat just four months on from winning the FA Cup.

"The energy we have around the place is much better and wins bring a lot of confidence. You can see that today in the way the team played."

West Brom are yet to win in four games since Sam Allardyce took charge and the former England manager needs to quickly instill the defensive discipline he has made his trademark at previous clubs if his new team are to have any chance of survival.

The Baggies have shocked Manchester City and Liverpool by claiming 1-1 draws on the road in recent weeks, but have now conceded 12 goals in Allardyce's first three home games.

"I think we need to work out a way to make sure we are not as sloppy as we are at conceding goals," said Allardyce, whose side remain second bottom, six points from safety.

"That seems to be by defending deeper like we did at Man City and Liverpool. It seems like when we do try and open up then we leave opportunities for the opposition and we're not able to cope."

Arteta's decision to finally put faith in his crop of talented youngsters has turned his side's season around. Bukayo Saka was again the shining light, while Kieran Tierney and Emile Smith Rowe also impressed.

Arsenal's poor run was principally caused by a struggle to score goals, but they were a threat from the off despite the treacherous conditions on a snow covered surface.

Sam Johnstone denied Hector Bellerin and Saka inside the first 10 minutes, but he was powerless to stop Tierney's stunning opener on 23 minutes.

The Scotland international left Darnell Furlong trailing in his wake before cutting inside onto his weaker right foot and curling into the top corner.

Arsenal's second was reminiscent of their flowing football at the height of the Arsene Wenger era as Saka fed Lacazette, whose brilliant pass played Smith Rowe in behind the West Brom defence and he squared for Saka to tap into an empty net.

The one way traffic continued after the break and some comical West Brom defending led to the third as Semi Ajayi smashed a dangerous cross off his own post and the ball broke to Lacazette to apply a simple finish.

Moments later another raid from Tierney down the left teed up Lacazette for another finish from point-blank range for his fourth goal in three games.

Alexandre Lacazette English Premier League Football
Get the latest updates on SA vs IND 2021-22, check out the Schedule and Live Score . Like us on Facebook or follow us on Twitter for more sports updates. You can also download the NDTV Cricket app for Android or iOS.