It is Chelsea's second league title win in three seasons, their sixth in total, and comes at the end of former Juventus and Italy coach Antonio Conte's first season as manager. 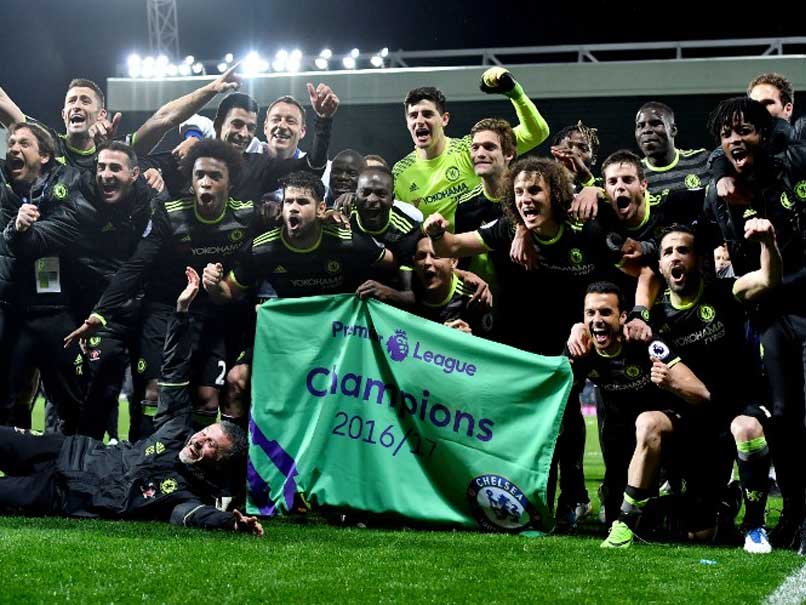 Substitute Michy Batshuayi's dramatic 82nd-minute winner gave Chelsea the Premier League title following a hard-earned 1-0 victory at West Bromwich Albion on Friday night. The Belgian striker's late goal at The Hawthorns took Antonio Conte's side 10 points clear of second-place Tottenham Hotspur, who have only nine points left to play for. It is Chelsea's second league title win in three seasons, their sixth in total, and comes at the end of former Juventus and Italy coach Conte's first season as manager.

"This is a great achievement for the players," Conte told Sky Sports in a pitch-side interview after breaking away from his players' jubilant celebrations.

"I thank them for their commitment and work-rate. They showed me a great attitude to try to do something great this season. After this win we must be happy, we must be pleased.

"It wasn't easy for me to arrive in England and try different habits, a different language and inherit players after a bad season."

A video posted on Chelsea's official Twitter account showed reserve goalkeeper Asmir Begovic tipping an ice bucket over Conte as he entered the changing room while Diego Costa sprayed him with champagne.

Batshuayi, the understudy to Costa, had only been on the pitch for seven minutes when he scored the winning goal -- his first in the league since August.

"It's good. It's the best day for Chelsea today," said Batshuayi, who arrived from Marseille last year in a 33.2 million pounds (USD 42.8 million, 39.1 million euros) transfer.

"Everybody is happy. It's great to take the trophy."

Chelsea midfielder Cesc Fabregas said: "I thought it was going to be one of those days. We had so many chances in the first half and then we got a bit nervous.

"The beauty of football: a player who didn't play a lot scores the winning goal for the championship."

Conte, who claimed three Serie A titles as Juventus coach, has restored Chelsea to the winners' circle by rebuilding from the chaotic end of Jose Mourinho's second reign.

Two years after Mourinho led Chelsea to the title, Conte has stitched the London club back together after dressing-room unity unravelled under Mourinho during a horrendous title defence last season.

The Italian's side finally broke through West Brom's stubborn resistance with eight minutes remaining and will now chase the double when they face Arsenal in the FA Cup final on May 27.

Chelsea quickly began applying pressure, but West Brom had a huge chance on the counter-attack when James McClean seized on a loose pass and raced 50 yards into Chelsea territory.

But his attempted pass to Rondon was poor and the Venezuelan was crowded out by Chelsea defenders.

Chelsea were becoming frustrated in their efforts to breach the Baggies' defence, but Fabregas nearly broke through with a snap-shot that flashed half a yard wide of the far post.

Chelsea might have broken the deadlock just two minutes into the second half when a powerful cross-shot from Victor Moses was turned around the post superbly by West Brom goalkeeper Ben Foster.

Yet there was almost a shock for Chelsea when Rondon escaped a challenge from David Luiz and raced clear, only for Cesar Azpilicueta to make a vital, saving challenge.

Rondon then teed up substitute Nacer Chadli, who fired a shot narrowly wide.

But with eight minutes remaining, Chelsea finally struck as Azpilicueta broke into the West Brom box and crossed from the right for Batshuayi to force home from close range.

Conte charged onto the field in celebration, while West Brom stewards were forced to eject three pitch invaders before the game could be completed and Chelsea could celebrate the title.

"We didn't need Chelsea to get a bit of luck," said West Brom manager Tony Pulis.

"We needed to have the breaks go for us. We contained them well. No-one can say they had an easy game."

Long-standing captain John Terry will lift the Premier League trophy after Chelsea's final game of the season at home to Sunderland on May 21, which will be his last match for the club.

"These boys have been on the field doing it week in, week out," Terry said.

"It's been a delight to sit and watch, a different perspective. The togetherness was shown from day one."

Comments
Topics mentioned in this article
Chelsea West Bromwich Albion Michy Batshuayi John Terry Cesc Fàbregas Antonio Conte English Premier League Football
Get the latest updates on India vs England Series, India vs England , live score and IPL 2021 Auction . Like us on Facebook or follow us on Twitter for more sports updates. You can also download the NDTV Cricket app for Android or iOS.