The 25-year-old, who can play at full-back or in a central position, has been linked with a move away from the Etihad and he has only two years remaining on his contract. 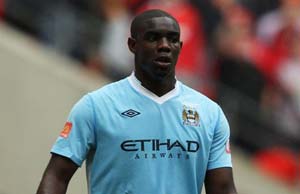 Versatile defender Micah Richards wants to remain at Manchester City -- but warned that he must be playing regularly.

The 25-year-old, who can play at full-back or in a central position, has been linked with a move away from the Etihad and he has only two years remaining on his contract.

"Last season was a bit of a nightmare with injuries. I picked up the ankle problem at the Olympics and came back from that and then tore my cartilage," Richards told the Manchester City website, after touching down in Hong Kong on Monday.

"The main thing is to be playing. I know there are a lot of games and I don't expect to play every game but the season we won the title me and Zaba (Pablo Zabaleta) rotated really well together so if we can do that this season I'll be happy."

There has been speculation Richards could be tempted to move abroad, with Inter Milan reportedly interested.

But he said: "Manchester City is my club and I've never considered playing anywhere else.

"I think there has been speculation because I've got two years left on my contract and Pablo Zabaleta had a fantastic season.

"He's outstanding but that's what you expect at top teams and you expect competition. The season before we won the Premier League and I had a good year, but now I'm just happy to be back fit."

City play South China in Hong Kong on Wednesday as part of the Barclays Asia Trophy.