Liverpool captain Steven Gerrard has played down the significance of Sunday's Merseyside derby by claiming that it does not matter if his team finish below Everton in the Premier League this season. 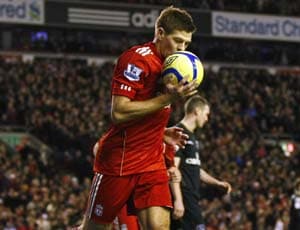 Liverpool captain Steven Gerrard has played down the significance of Sunday's Merseyside derby by claiming that it does not matter if his team finish below Everton in the Premier League this season.

Everton visit Anfield on Sunday knowing that victory will guarantee they finish above their city neighbours for the third season in a row.

However, Gerrard has dismissed talk of a power shift, pointing to Everton's 18-year trophy drought and the fact neither team has mounted a challenge for the league title this season.

"If Everton finish above us and their supporters are really happy and their players and everyone is really happy, then that's up to them," he said, in comments reported by several British newspapers on Saturday.

"But if we finish above Everton there will be no celebrating or anything around here, because it's nothing, really.

Asked if Everton were now the dominant force on Merseyside, he replied: "Yeah, but they haven't won anything, have they? It's nothing to finish sixth or seventh in this league."

Despite his own apparent antipathy, Gerrard conceded that his team-mate Jamie Carragher will be desperate to prevail in what will be his final Merseyside derby before he retires at the end of the campaign.

"He'll want to win his last derby and finish above Everton," Gerrard said.

Comments
Topics mentioned in this article
Football Manchester City Everton Liverpool Mark Hughes Steven Gerrard Alex Ferguson English Premier League
Get the latest updates on India vs Australia and check out  Schedule, Results and Live Score. Like us on Facebook or follow us on Twitter for more sports updates. You can also download the NDTV Cricket app for Android or iOS.