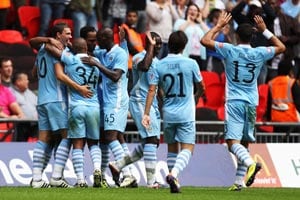 The 19-year-old made his eighth successive appearance for City against Wigan on Wednesday as they kept hot on the tails of Premier League leaders United with a 2-0 win.

Roberto Mancini's side welcome Everton to Eastlands on Saturday and Nastasic wants the champions to keep it tight at the back even though they will have their hands full with Nikica Jelavic and Marouane Fellaini in town.

Serbian centre-back Nastastic has been impressive since linking up with Vincent Kompany in the heart of City's defence and Mancini's team have conceded just one goal in their last six league matches.

Nastasic was largely unknown in English football when he arrived from Fiorentina in pre-season but now he has City fans singings his praises.

And he is keeping Kolo Toure and Joleon Lescott on the bench for the side with the best defensive record in the league.

"Everything is going well for us," he said. "In the last six games we have only conceded one goal -- now we need to keep it going, but this time make it no goals."

The teenage sensation credits much of his form to the help he has received from City skipper and experienced Belgian international Kompany.

"We talk every day on the pitch and on the training ground, and it makes me happy to play alongside such an excellent captain and in such a good team," Nastasic explained.

City midfielder James Milner is set to miss Saturday's match as a result of a hamstring injury he suffered against Wigan.

Meanwhile Gael Clichy and Jack Rodwell are both doubtful, with Micah Richards definitely ruled out.

Everton could be missing Leighton Baines should the left-back not recover in time from the hamstring strain he sustained in the Toffees' demanding draw with Arsenal on Wednesday. But Jelavic, who played 90 minutes against the Gunners despite flu, should be fit.

Everton have now drawn six of their last eight games but midfielder Leon Osman is confident they can get the wins that would see them close the four-point gap to fourth-placed West Brom.

"Of course there is disappointment when you don't get three points because football is about winning," he said. "Most of the games we should probably have won had it not been for a mistake or a refereeing decision.

"But we will stay positive, if we nick a goal in any of those games and we could be six or seven points better off.

"It is tight and a couple of wins will start you going in the right direction. We'll try and find a solution in the next few days and will look to start picking up wins in the next few weeks.

"After six draws in eight games we need to start turning them into wins if we want to finish high up the table."

The England international also insisted Everton had no fear of facing City, given they've won four of their last five matches at Eastlands.

"We are looking forward to the game against City. It is going to be difficult going to play the champions but we will be confident as we've had a reasonably good record there over the last few years."

Comments
Topics mentioned in this article
Football Manchester City Alex Ferguson Mark Hughes Inter Milan Matija Nastasic English Premier League
Get the latest updates on IPL 2020, check out the IPL Schedule for 2020 and Indian Premier League (IPL) Cricket live score . Like us on Facebook or follow us on Twitter for more sports updates. You can also download the NDTV Cricket app for Android or iOS.