Fulham manager Martin Jol has slammed Liverpool for unsettling Clint Dempsey after the American forward was left out of the Cottagers' squad for their Premier League opener against Norwich on Saturday. 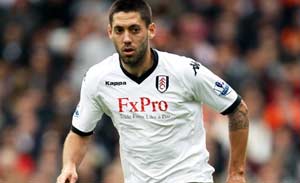 Fulham manager Martin Jol has slammed Liverpool for unsettling Clint Dempsey after the American forward was left out of the Cottagers' squad for their Premier League opener against Norwich on Saturday.

Dempsey pulled out of Fulham's pre-season training camp in Switzerland earlier this month after Liverpool manager Brendan Rodgers told his own club's website that he had made an inquiry about the player.

But the Anfield club have yet to follow up their interest with an official bid for Dempsey, who has one year left on his contract, and former Tottenham boss Jol has been infuriated by the Anfield club's behaviour.

"That was very disappointing," Jol said on Friday. "There was never an offer. Clint himself told everyone he was going to Liverpool so we really thought there was quite a firm interest in him.

"Even (Rodgers) told everyone he was interested in Clint Dempsey, but our people never had an offer on the table, so it's almost embarrassing.

"If you have shown interest in a player, especially in England, you have to follow it up with an offer. They didn't."

Now Jol admits the situation has left Dempsey unsettled and not in the right frame of mind to face Norwich at Craven Cottage this weekend.

"Clint was not involved over the last four weeks so he is not going to be in the squad. He is not committed to the club. He wants to leave," Jol said.

"I would like to keep him, but I think it's impossible. It's a sad and an almost embarrassing situation."

Dempsey, 29, has been training separately from his team-mates since Liverpool's interest emerged, but Jol insists the American, who scored 23 goals last season, will not be sold cheaply.

"Maybe Liverpool will come back," Jol said. "I can assure you that our chairman is strong enough. At first we didn't want to get rid of him, later on we had to change our position.

"But our view is that we won't let Clint Dempsey go on the cheap, that's for sure."