Martin Jol fears Mahamadou Diarra could be sidelined for months

Fulham manager Martin Jol admits Mali midfielder Mahamadou Diarra could be sidelined for up to five months after suffering a knee injury on international duty. 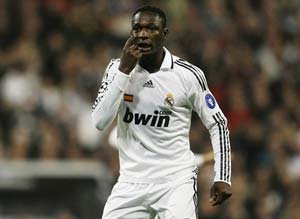 Fulham manager Martin Jol admits Mali midfielder Mahamadou Diarra could be sidelined for up to five months after suffering a knee injury on international duty.

Jol confirmed on Thursday that former Real Madrid star Diarra will need surgery on his left knee as a result of the injury he sustained in his first appearance for Mali in more than a year.

The 31-year-old, who joined Fulham after being released by Monaco last year, will miss at least another three weeks, but Jol fears Diarra will be sidelined for much longer if he has damaged his cruciate ligament.

Jol said: "There's a little piece of cartilage floating in his knee, so we have to operate that in any case, and that can be three or four weeks.

"But if there is damage to his cruciate ligament, for example, it will take a lot longer. It will take him three, four, five months at least."