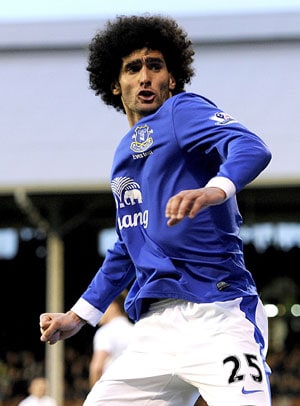 England winger Johnson, 25, prodded in just before the interval to score his first goal since joining the club from Manchester City in a £10 million ($15.9 million, 12.5 million euros) deal in August.

But just as Sunderland looked set to cling on for only a second win in 18 matches, Fellaini pulled Everton level with his sixth Premier League goal of the season with 15 minutes left.

Less than three minutes later, Jelavic added a second with his fifth of the campaign to make sure the Toffees extended their unbeaten run against the Black Cats to 16 matches.

There was a blow for Everton manager David Moyes, however, with Belgian winger Kevin Mirallas -- who has become a key player since joining from Olympiakos in the summer -- limping off with an apparent hamstring injury.

Everton's impressive start to the campaign had looked to be in trouble after four consecutive draws but this victory keeps alive their hopes of an unlikely challenge for a Champions League place.

The two sides provided an exciting opening and the hosts had an early penalty appeal turned down when Jelavic went down under John O'Shea's challenge in the Sunderland area.

But Martin O'Neill's side went close to moving in front when Stephane Sessegnon slid a pass through and Steven Fletcher was denied by the legs of Everton goalkeeper Tim Howard.

Sunderland's compact formation was proving difficult for Moyes' men to break down, although Jelavic had an effort deflected over the bar.

Mirallas opened up the Sunderland defence with a fine pass that allowed Steven Pienaar through on goal, but the South African's powerful effort from a narrow angle was pushed wide by Simon Mignolet.

On a rare occasion when the visitors found some space, a fine passing move involving Fletcher and Johnson ended with Jack Colback failing to trouble Howard with a weak shot.

Fellaini was denied by yet another block from Carlos Cuellar as he attempted to turn in a fine cross from Baines, and Mignolet was also at full stretch to push away Phil Neville's drive from 30 yards.

But in first-half added time the visitors moved ahead when a Sebastian Larsson corner was cleared by Jelavic, Craig Gardner hooked the ball back in, and Johnson finished on the half-volley.

Even the addition of another striker, Apostolos Vellios, after the break failed to fire Everton, and the hosts looked increasingly short of ideas.

But with just under 15 minutes remaining, Fellaini received a pass from Steven Naismith on the edge of the area and thumped a shot into the bottom corner before teeing up Jelavic for the winner.