Mark Clattenburg out again as 'racism' enquiry goes on

Referee Mark Clattenburg will miss a fourth successive weekend of Premier League action as the Football Association continues an investigation into 'racism' allegations against the official. 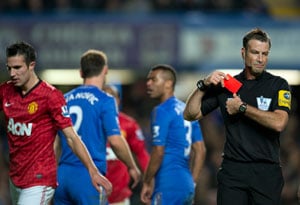 Referee Mark Clattenburg will miss a fourth successive weekend of Premier League action as the Football Association continues an investigation into 'racism' allegations against the official.

Chelsea complained to the FA the referee used a term understood to have been interpreted as racist towards Nigeria international John Obi Mikel during the 3-2 Premier League defeat by Manchester United on October 28.

Last week British police dropped their own separate enquiry into the incident, sparked by a complaint from the Society of Black Lawyers.

A police statement said: "No victims have come forward... Without a victim and/or any evidence that any offence has been committed, the matter cannot currently be investigated."

It is understood Clattenburg, who denies the accusations against him, does not want to take charge of any matches until the FA have resolved the matter.

An independent lawyer is studying the evidence before recommending a course of action to the FA.

Comments
Topics mentioned in this article
Football John Terry England Manchester City Alex Ferguson Mark Hughes English Premier League
Get the latest Cricket news, check out the India cricket schedule, Cricket live score . Like us on Facebook or follow us on Twitter for more sports updates. You can also download the NDTV Cricket app for Android or iOS.