Mario Balotelli could be given fresh chance at Manchester City

Balotelli was sent off in City's last visit to Emirates Stadium, a 1-0 loss in April that left the team eight points behind United with six games left. City still went on to win the title. 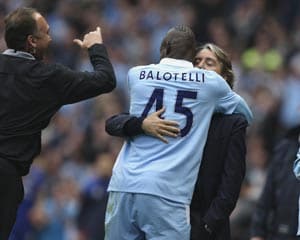 Mario Balotelli could be given another chance to resurrect his Manchester City career by being recalled for Sunday's match at Arsenal, where the controversial Italy striker's recklessness almost cost his team the Premier League title last season.

Balotelli hasn't started a game since City's derby loss to Manchester United on Dec. 9, with his future at the English champions appearing in doubt after he was involved in a training-ground scuffle with manager Roberto Mancini last week.

However, with Sergio Aguero still out with a hamstring injury and Balotelli returning to the squad for the FA Cup last weekend, Mancini may once again put his faith in his compatriot for a fixture City hasn't won in the league since 1975.

"He has trained well and I hope this year will be different," Mancini said Friday of Balotelli, who arrived at training on Thursday sporting a new bleached-blond hairstyle.

Balotelli was sent off in City's last visit to Emirates Stadium, a 1-0 loss in April that left the team eight points behind United with six games left. City still went on to win the title.

That was the fifth straight league game at Arsenal in which City has failed to score and extended a 37-year winless run at the home of the London club.

"We feel strongly we can turn up anywhere and win but it's just not been the case unfortunately when we've been to the Emirates," City goalkeeper Joe Hart said. "But it's not one of those places where you walk through the doors and you're like, 'Oh no, we're going to lose.'"

City is currently seven points behind United in what appears to be a two-team race for the title with 17 matches remaining.

United also has a tough match Sunday, with a resurgent Liverpool traveling to Old Trafford for what is always one of the biggest matches of the season between England's two most successful clubs.

"It is intense and emotional. Everything you can think of in a derby game will probably be there on Sunday," United manager Alex Ferguson said Friday.

Wayne Rooney, a Liverpudlian, will miss the match as he continues his recovery from a knee injury but United can still fall back on fellow striker Robin van Persie, the league's top scorer with 16 goals in his first season at the club following his move from Arsenal for 24 million pounds (then $38 million).

"It was a lot of money for a player in the last year of his contract," Ferguson said, "(but) we wanted him badly, so we were prepared to go the extra mile.

"Any player coming to us for the first year, you never know for sure. Who would have thought Wayne Rooney would have got a hat trick on his debut? It is fairy tale stuff."

Nani and Anderson are both back in training after their respective hamstring problems and the midfield pair are in contention for Sunday.

Sturridge scored on his debut in the 2-1 win at Mansfield in the third round of the FA Cup on Sunday but has yet to make his league debut.

The weekend's other big match is last-place Queens Park Rangers' home game against third-place Tottenham, which will see QPR manager Harry Redknapp come up against the team that fired him last year.

Redknapp has caused a stir by saying only a "real dope" could fail to be successful at Chelsea - a slight presumed to be directed at Rafa Benitez but one that could also refer to Andre Villas-Boas, the current Tottenham manager who was fired by the Blues last season after just eight months.

"I don't spend my life worrying about what he or Tottenham are doing," said Redknapp, whose team is five points adrift of safety.

Comments
Topics mentioned in this article
Football Manchester City Inter Milan Mark Hughes Alex Ferguson Mario Balotelli English Premier League
Get the latest updates on ICC T20 Worldcup 2022 and CWG 2022 check out the Schedule, Live Score and Medals Tally. Like us on Facebook or follow us on Twitter for more sports updates. You can also download the NDTV Cricket app for Android or iOS.