With Hodgson an interested spectator at the Etihad Stadium, Pellegrini claimed that Hart had done enough to secure his starting berth for England's forthcoming -- and crucial -- World Cup qualifying fixtures against Montenegro and Poland. 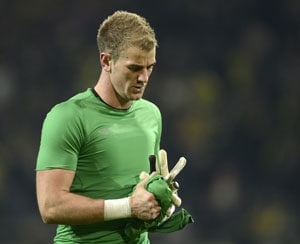 City ended the Premier League's only unbeaten record on Saturday in a game in which Hart found himself under severe scrutiny following a poor mid-week showing against Bayern Munich.

Hart had already come in for criticism this season, most notably following City's 3-2 defeat at Cardiff City and England's friendly win over Scotland.

But with Hodgson an interested spectator at the Etihad Stadium, Pellegrini claimed that Hart had done enough to secure his starting berth for England's forthcoming -- and crucial -- World Cup qualifying fixtures against Montenegro and Poland.

"It was not a simple decision to pick him. It was a very difficult decision," said Pellegrini, who was considering calling up seldom-used Romanian Costel Pantilimon for the game.

"But I think Joe needs the trust of all of us -- of me, of the other players, of the fans, everyone.

"He has to play two more games with England and Joe is exactly the same as all the team -- he is an important character for us.

"I talked alone with him after the Bayern match. I think of course he feels he didn't do well in the last game, he was guilty, but today (Saturday) he reflected how strong his character is."

Hart might have done more to keep out a superb opening goal from Romelu Lukaku -- his seventh goals in his last six league games -- but Pellegrini did not want to attribute blame for the incident.

"The responsibility for the goal is always for the whole team," he told reporters. "It's not fair, always analysing what Joe Hart did, although it's your job."

City responded well with an equaliser from Alvaro Negredo, a 45th-minute strike from Sergio Aguero, and a second-half own goal by Tim Howard.

The American goalkeeper turned an Aguero penalty onto the post, only for the ball to hit him and bounce into the net, after Seamus Coleman had been penalised for impeding Pablo Zabaleta.

Everton felt they should have had a penalty of their own, with Matija Nastasic appearing to push Lukaku over when the score was 1-1, and manager Roberto Martinez claimed referee Jon Moss -- who also showed nine yellow cards -- was to blame for his side's first defeat of the season.

"I thought he was very disappointing. He killed the game between two very good sides," said Martinez.

"The consistency in referees is vital. The moment (Pablo) Zabaleta gets in the box and falls to the ground, with the emotions of the crowd you have two seconds as the referee to assess what it is.

"I don't think two bad decisions make a good one, but if one is a penalty, then the other one is."

City's victory was tempered by the loss of captain Vincent Kompany, who suffered a muscle injury in the first half that required him to be replaced.

However, there was better news concerning forward Stevan Jovetic, who trained with the first team on Friday and is expected to be fit to play for Montenegro against England at Wembley Stadium on Friday.

Comments
Topics mentioned in this article
Football Manchester City Inter Milan Mark Hughes Alex Ferguson Joe Hart English Premier League
Get the latest updates on India vs Australia and check out  Schedule, Results and Live Score. Like us on Facebook or follow us on Twitter for more sports updates. You can also download the NDTV Cricket app for Android or iOS.